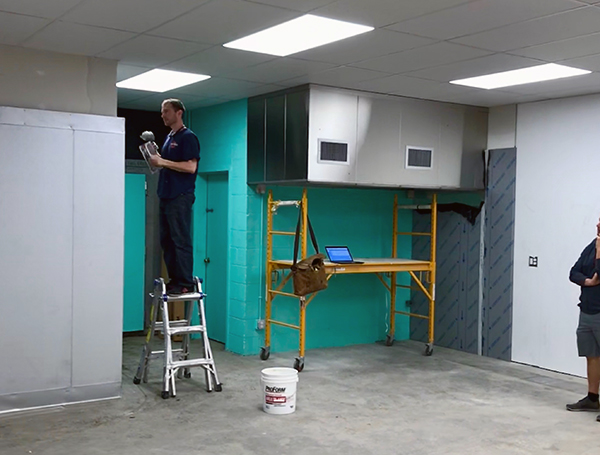 The deli at Mehuron’s Supermarket in Waitsfield is shrouded in plastic as the old deli counter, walk-in, food case and prep areas are removed and a new space constructed.

The new space will extend into what is now the back of the store where the bottle redemption and bakery are located, explained owner Tom Mehuron.

“We’re tearing down and starting anew. We’re putting in a commercial kitchen and we’ll be offering hot foods and foods to go. We needed more space and wanted to create a more upscale market,” Mehuron said.

The project will double the existing footprint of the deli.

“We got rid of the bottle redemption area and put one of those bottle return machines out in front of the store. We’re also incorporating our existing bakery space into the new commercial kitchen. We created the bakery back in the time when you couldn’t get a good loaf of hard-crusted bread in The Valley. Now, because of all the good bread offerings we have, we no longer need a stand-alone bakery,” he explained.

The new space will allow Mehuron’s to hire a few more people to staff it, in addition to the new manager of the commercial kitchen, Patrick Garvin. Garvin came from Sugarbush and was hired in December. He is overseeing how the kitchen is set up while Mehuron’s stepson, Bruce Hyde Jr., is overseeing the project.

“I gave Bruce a budget and he’s handling the project. I feel like a kid waiting for Christmas, knowing there will be a present but not knowing what it is!” he joked.

The new commercial kitchen will continue to offer the deli and baked goods services that customers want along with meals for families on the run that can be picked up and popped in the oven to heat. Additionally, hot takeout lunches will be offered.

Mehuron said that he hopes to be slicing deli meats and making sandwiches by this Saturday, May 19, and have the rest of the hot food component operational by the following Saturday, June 2.