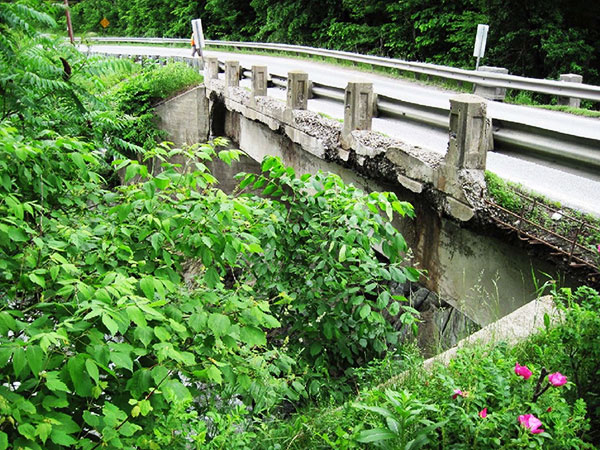 Route 100B at the southern entrance to Moretown Village will be closed in 2020 from the end of June through the end of August when the bridge over the Mad River is removed and replaced.

The current bridge will remain one-way with a traffic light until the beginning of construction.

The 1928 bridge will be replaced using VTrans’ Accelerated Bridge Program, which favors closing roads to replace bridges versus installing temporary bridges while new bridges are constructed. In the case of the Moretown bridge, the alignment of the roadway, the gorge and the river would not allow a temporary bridge to be built.

While the road is closed, traffic will be rerouted via Route 100 and Route 2, adding 19.5 miles to the commute of drivers. There are two local bypasses, Stevens Brook Road and Pony Farm Road, which are local roads that VTrans is not sanctioning. Those detours shave a significant amount of time for commuters, adding 4.6 miles and 3.4 miles, respectively.

Because the new structure is at least 8 feet wider than the existing structure, VTrans needs to work with landowners on the rights of way for the abutments.

VTrans will be going into final design on the project this summer and fall. The cost of the replacement will be between $2.4 million and $2.75 million.

Two summers ago, VTrans replaced a bridge over the Mad River near Lareau Farm in Waitsfield with a similarly Accelerated Bridge Program. Route 100 was closed for 28 days while the old bridge was removed and a new, partially pre-constructed bridge was put into place.