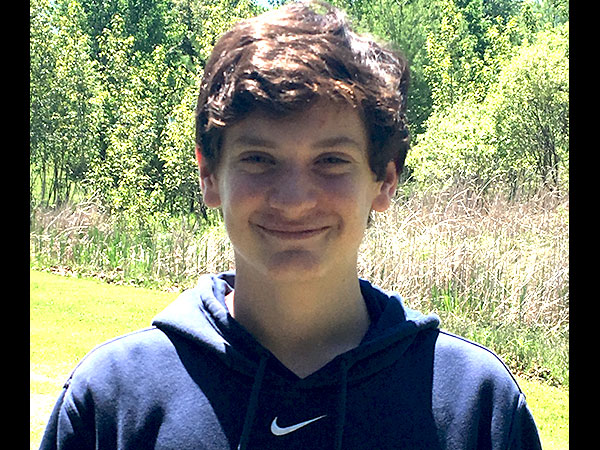 Harwood Union Middle School (HUMS) eighth-grade student Skylar Platt of Warren won an honorable mention award in this year’s Hildene Lincoln essay competition and was among the honorees at a celebratory luncheon held at Hildene, the Lincoln family home in Manchester, on Sunday, May 20. The event honored all the winners of the 12th annual competition for eighth-graders from around the state. Educators, family and friends were on hand to see this year’s young writers receive their awards.

The participating students were asked to grapple with the concept of what it means to be a patriotic American. This is a topic that can sometimes lead to heated debate. With Lincoln as touchstone, writers were made aware that in his time the actions of the revered president were seen by some as patriotic and by others as unpatriotic. He was viewed as both a traitor and a patriot. Today the nation is again deeply divided on many issues and among them is the concept of patriotism.

This year’s 187 eighth-grade writers responded to the following prompt in 500 words or fewer: Describe a current or recent event in which the actions of the participant(s) may be viewed as patriotic by some and as unpatriotic by others. Discuss the differing points of view. What is your position and why?

Platt wrote about Edward Snowden’s release of classified information. He concluded that, “Based on what is currently known about the Snowden story, I believe that revealing the surveillance programs was a patriotic act done in the American tradition of standing up for what you believe at great personal risk.”

Platt further noted, “In the current social-media environment, debates about patriotism seem to be filled with anger and often hate. Fair-minded people can have different opinions about sensitive issues in our society, such as Edward Snowden’s patriotism or if kneeling during the national anthem is an acceptable form of protest. We don’t always have to agree. But we do need to have calm and respectful discussions about the main issues of any debate. Deciding if Snowden is a patriot is less important than having a thoughtful discussion about the issues he raised: How do we balance surveillance, privacy and security in a free society?”

Winners were awarded the following prizes: first place, $1,000; second place, $750; third place, $500; and $250 to each honorable mention. All the competition writers were vigorously applauded for their accomplishments.

In his closing remarks, Hildene president Seth Bongartz noted that all the writers made powerful points when making their decision as to whether the actions of a participant(s) in a current or recent event were patriotic or unpatriotic. He further remarked, “The reality of the world is that sometimes there is no exact right and no exact wrong, but we should stand up for what we believe, always with the singular goal of making the world a better place. By educating yourselves, thinking critically and carefully marshaling your arguments in writing, you have become constructively involved. You exemplify the values that guided Abraham Lincoln and that guide this competition. Lincoln clearly saw wrong and put himself on the line to right that wrong. His willingness to do so changed the world. Now it’s your turn. The world needs you to do your part.”