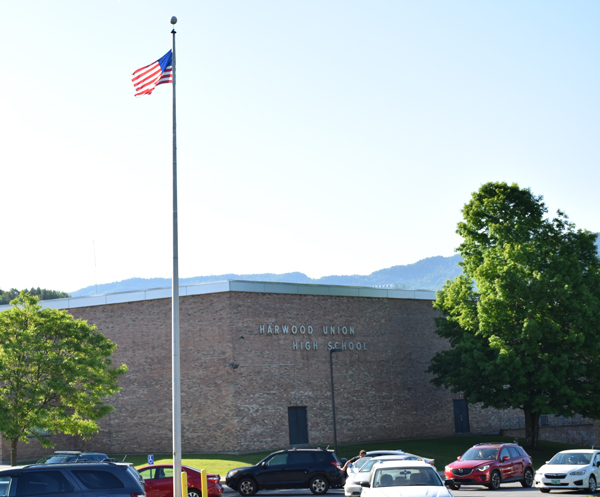 Following the incident of a possible threat at Harwood Union last week, Ray Daigle, director of facilities, briefed the Harwood Unified Union School District (HUUSD) Board on the status of safety protocols at district schools and said that the question of whether a school resource officer was needed needs to be taken to the community.

Daigle spoke to the board on June 13, the evening after a 15-year-old Harwood Union student from Warren was charged by Vermont State Police with criminal threatening and disorderly conduct by electronic device. The student was charged with making threatening statements on Facebook about perpetuating a school shooting. Police were alerted by administrators at the school and reviewed the posts and then responded to the student’s residence.

“If you see something, say something. If you hear something, say something. It may seem like nothing, but if you start pulling those pieces together, and you say something and then she says something … we start seeing a pattern and an area of concern. It’s not just the administration, not the just the teachers, it’s the entire community. Both students and families, people out in the world that see these things and think “it’s just a kid being a kid” – it’s not that way. We really need to be aware of that. We live in a different time,” Daigle continued.

WHO HAS THE KEY?

“Who has a key to the door?” was one of the main questions Ray Daigle posed to the board, before he went over the locked door that individuals have to be buzzed through by the front office to enter Harwood Union High School. From there visitors must come to the front office to sign in and receive a pass. Daigle offered the suggestion that visitors should be walked to their destination after stating their cause to coming to the school.

Daigle explained current proposals under consideration such as universal crisis manuals and individual classroom preparedness uniformity. With the everyday concern that school threats are becoming a real thing and coming closer to home, the board had questions about safety at Harwood and what’s being done to ensure that the appropriate measures are taking place to keep students and educators safe.

For individual classroom preparedness, Daigle mentioned having a manual by the door in every classroom for administrators that goes over proper procedures in case of an emergency as well as training. Daigle also proposed having scenario-based drills based on security. Physical adjustments such as window shades for ground level windows, security films on the windows to slow individuals trying to get in, interior electronic locks from hallways doors, exterior speakers for allowing people outside when evacuated to hear what’s going on and packed bags for rooms to have supplies for personal needs for lock-down situations are also under consideration.

NOT IN OUR COMMUNITY

“People never thought it could happen in their community. Then Fairhaven reminded us that it could happen again in Vermont. Part of the problem is that these incidents happen and there’s a heightened awareness and people are pretty wound up and anxious about it. Over time that fades. They become complacent and go back to ‘It happened a long time ago already in this state. It won’t happen again.’ We need to accept the world has changed and we need to adjust our culture.”

“These people were chosen because everyone here has had training and or experience in dealing with a variety of incidents and some awareness of emergency preparedness. We had our first meeting recently and we created some objectives and that’s to oversee the overall safety procedures in all the schools including drills and creating a consistent language in procedures throughout the district,” Daigle explained.

During the slideshow, Daigle explained new state funding that became available for the schools through a competitive grant process. He said the district would be applying for the state security grant money that can be up to $25,000 to improve the security.

Peter Langella, Moretown representative to the board, asked Daigle about school resource officers for area schools.

“We had this discussion with the Harwood Union board quite a few years ago and at that time there was no interest in pursuing that from our community members. We’ve never broached that again,” Atwood said.

Nease said that the issue of school resource officers would need to be a discussion for the community at large, noting that there are very strong and mixed points of views on having such officers regularly staffing in schools.

Atwood detailed things the administrators are doing to improve the wellness and community of students and staff at Harwood. This included acupuncture, yoga activities, health fairs, chair massages, and therapy dogs aimed at supporting student social and emotional well-being. Those programs were started after the October 2016 car crash that claimed the lives of five local students.