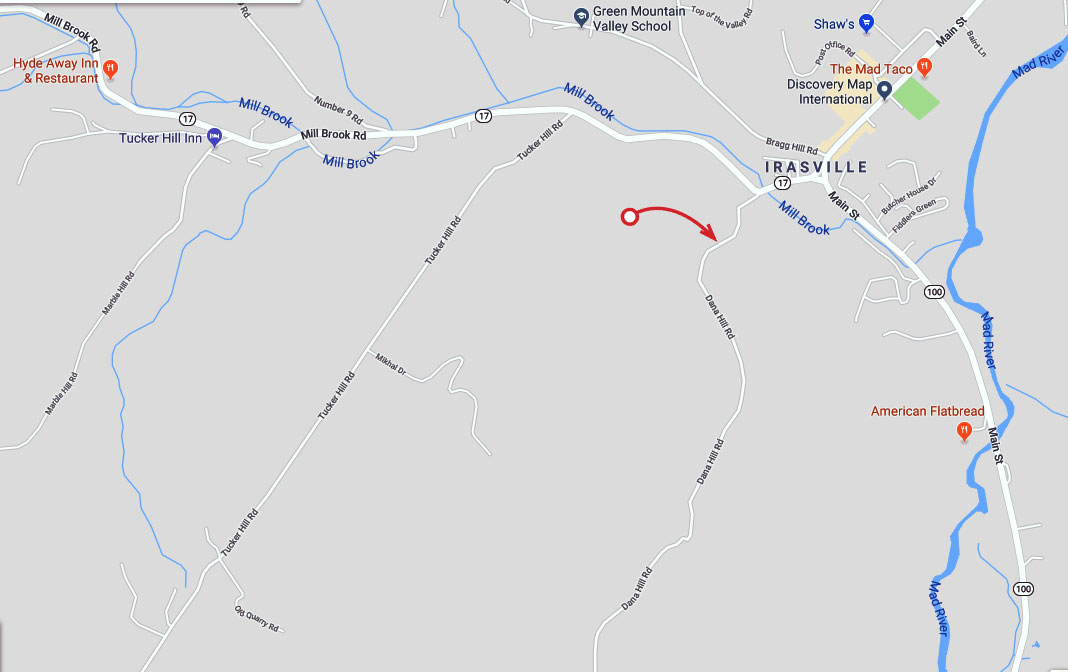 Dana Hill Road residents, property owners and business owners were on hand at the Waitsfield Select Board this week to learn more about the possibility that the town may discontinue Dana Hill Road.

Dana Hill Road is a Class 3 road for the first several hundred feet and then reverts to a Class 4 road to the top. It is home to fewer than a dozen people with year-round homes and camps as well as a business. The road also provides access to the Howe Block of Camel’s Hump State Forest.

At the select board’s June 11 meeting, town administrator Trevor Lashua told those present that the town has been working its way systematically through its Class 4 roads, reclassifying them or throwing them up. Dana Hill was identified as the road to tackle this year, he said.

The process, Lashua explained, begins with a site visit, followed by a public hearing and then a deliberation period of up to 60 days.

Road residents asked why Dana Hill was under consideration for being reclassified as a trail. Board chair Paul Hartshorn said that because of new state standards that are part of the state’s clean water regulations, towns have to bring municipal roads up to more stringent state standards.

Board member Kari Dolan said towns now have to get municipal road general permits that require them to follow the state’s best practices standards in terms of erosion on Class 4 roads and in terms of identifying and working to minimize sections of such roads that are prone to gullying.

“How much money are you trying to save?” asked road resident Peter Laskowski.

“If we meet the state standards we’re looking at a lot more money than we’re spending on all our roads together,” Hartshorn said.

“And changing the road to a trail will save money? The road will wash down the hill if those boulders and water bars are not maintained. If it’s an economic issue, you’d think that sending bulldozers up every now and then to maintain the ditches would be the most economical way to make sure we have a working road,” Laskowski continued.

In the past Waitsfield has plowed the Class 3 portion of the road and has provided residents with gravel for the upper portions of the road. Road residents asked why that practice could not be continued.

Board member Jon Jamieson noted that complying with the new state standards would change the character of the road and wondered if residents would like it if the road were widened, gullies eliminated and bridges installed.

“It would become a thoroughfare,” he said.

Madhuri Barefoot’s family owns a home and 25 acres on Dana Hill Road and she runs a business, True North Wilderness, in the state forest and on her land. She pointed out that she has a state Act 250 permit that is based in part on Dana Hill Road being a Class 4 road, accessible for fire and emergency services. She said reclassifying the road to a trail would be a great concern to her.

“As far as the fire department goes, we’re not going up there,” Hartshorn said.

Barefoot noted that the fire department trucks did in fact go up the road to demonstrate that it was possible, during the permitting process.

Bob Kogut, president of the local mountain bike club, said that the club supports keeping the road as a Class 4 road.

“We use that road to get machinery and trucks up there to maintain the trails. It is helpful for us that it’s a Class 4 road,” he said.

“If we keep it a Class 4 road, it’s going to look like the bottom part all the way up,” Hartshorn said.

“Professionally, I’d prefer the character of the road to change to be more navigable,” Barefoot said.

“We’ve been looking at it economically. One million dollars is not going to fix that road. One million won’t touch that road,” Hartshorn said.

“So, the purpose is to avoid spending that $1 million?” Laskowski asked.

“That’s one of the main purposes,” Hartshorn said.

Board member Sal Spinosa told the residents that they can still ask the town for help maintaining the road but said he couldn’t promise anything.

Road resident Russ Chalom, who has owned land at the top of the hill for 40 years, said the town used to bulldoze and maintain the ditches and water bars until about eight to 10 years ago when that stopped and road residents had to start asking for help. He said that not having the regular maintenance done has caused a lot of damage to the road.

Kinny Perot, who owns a camp on the road, said that she’s of two minds about the road. She acknowledges the issues with the road and its steepness with the accompanying erosion and runoff issues, but also said she’d like to be able to have Hartigan come and service her septic system.

She questioned whether there might be another way to access Dana Hill Road, noting that the state had purchased more land for the Howe Block which is accessed via Tucker Hill Road.

Barefoot asked if there was a state level process by which towns could seek a variance from road standards to avoid spending $1 million. She also asked where the figure of $1 million had come from. Hartshorn said that was an estimate on his part. Barefoot asked if it was possible to get an actual estimate.

Resident Meg Hilly asked the board why members were considering a motion that would begin the process of reclassifying the road from Class 4 to a trail.

“To me, you should be looking at it as a Class 4 road versus going backward. This was the first road settled in the town. It has historical value,” she said.

Laskowski asked what would happen if the town did not bring the road up to state standards, to which Dolan said the town has 17 years to comply.