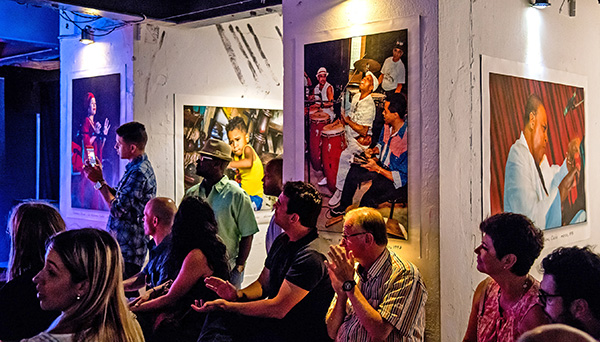 Waitsfield photographer David Garten’s exhibition, “Ritmo en la Piel” (Rhythm in the Skin) opened on Thursday, June 7, at La Fabrica de Arte Cubano (The Cuban Art Factory) in Havana, Cuba. On display are 11 live performance portraits of Cuban musicians shot over a period of 24 years from 1994, during the nadir of Cuba’s Special Period (the economic crisis triggered by the collapse of the Soviet Union) through 2017, three years after Cuban-American normalization.

The Cuban Art Factory is the largest private, nongovernmental art space in the country, featuring multiple galleries, live performance spaces and restaurants within a renovated cooking oil factory at the corner of Havana’s El Vedado neighborhood, just across the Iron Bridge from the Miramar neighborhood. The building was converted in 2012, and since opening in 2013 has attracted an audience evenly divided between Cubans and foreigners. On any given night one hears a multitude of languages spoken.

Ritmo en la Piel is located in Nave One, the first gallery space encountered upon entering La Fabrica, which doubles as both a gallery and live performance space. Depending on the time, one can browse the photos at leisure, or dance within an audience of over 100 while the photos, overlooking the action, lend ambience.

“It is an honor and a pleasure to show at La Fabrica de Arte, something I have wanted to do since it opened in 2013. I had the opportunity to photograph the renovation in 2012 and knew from day one La Fabrica was special. In these difficult times, it is important, as Americans, to expand our communication, cooperation and interaction with our close neighbors, our missing twins, the Cubans. We have a lot to offer, and to learn, from each other. The Vermont-Cuba connection is very dear to me," Garten said.

Garten has been a guest on WVPR’s Vermont Edition. His 2015 exhibition in Waitsfield, “My Personal Cuba” was covered by The Valley Reporter and other Vermont media.  His last exhibition in Havana, “Pasos Hacia la Paz” (Steps Toward Peace) was held at the Mella Theater during the Havana Ballet Festival in 2004. His Cuba photos have been published in the New York Times, Jazz Times Magazine and the website The Daily Beast.

Pulitzer Prize-winning journalist Mirta Ojito wrote about Garten’s Cuba photos, “These, for once, were not about a decaying city but, to me, about a decaying ideology and the US-Cuba conflict.”

Since 2012, Garten has been the in-house photographer for Arturo O’Farrill and the Afro Latin Jazz Orchestra at Symphony Space in New York. He photographed the ALJO’s last two CD covers which have won three Grammy’s between them.

The exhibit in Havana runs through August 31.