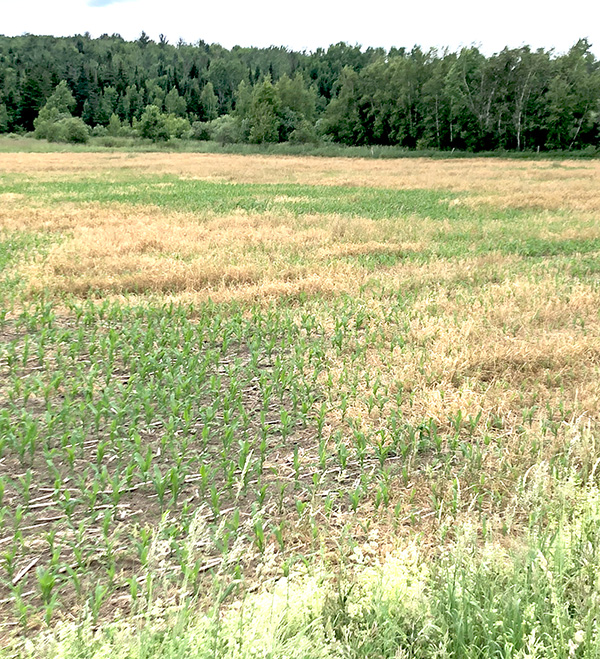 Some farmers are and some aren’t. There’s no consensus locally on whether no-till farming with cover cropping is the right solution. No-till farming is the concept of not tilling fields in an effort to improve soil quality, improve water quality and reduce erosion, run off and soil loss.

The concept is being actively encouraged by the Vermont Department of Agriculture because of the impact on water quality. Ryan Patch, assistant director of the water quality division of the Agency of Agriculture, said that no-till cropping is not new to Vermont although it is relatively new to The Valley.

“I think people are noticing it along the Route 100 corridor now, but it’s not new. Farmers in Addison County have been practicing it for a while,” he said.

No-till farming entails planting a cover crop in the fall, often winter rye, and letting it grow tall in the spring. That cover crop is either chemically or manually terminated and allowed to compost on the ground to feed the soil.  Corn is planted right into the cover crop either before or after it is knocked down.

The herbicide glyphosate is used to chemically knock the cover crop down. And that has generated a lot of comment on social media on the last few weeks.  Patch said that the use of the herbicide is safe and legal in Vermont and said that there are water quality and soil improvement benefits that outweigh any risks of its use.

“What people are seeing and reacting to as brown fields are fields where the cover crop has been terminated and the corn is growing through it. There’s no disturbance to the soil which means reduced runoff and erosion. But also, keeping a crop growing on the fields throughout the year, keeps the soil active and creates some nutrients from the cover crop that are available for the next crop. Over time, it improves the health of the soil which means that less fertilizer is needed,” Patch said.

Tilling, by contrast, by aerating the soil breaks up the aggregates and adds oxygen which eats up the nutrients making it harder for the beneficial microbes that are part of the system to survive.

Since the passage of Act 64, the state’s clean water act, the state has been working actively with farmers to incentivize them to try no-till farming. With this system, farmers still use livestock manure on the fields, but through surface application. Some farmers are using manure injectors on hay and corn fields, but those are currently in experimental stages and are expensive.

Former dairy farmer and current meat farmer Elwin Neill, Waitsfeild, is tilling his fields conventionally. He’s interested in and has been attending workshops and conferences on no-till farming and while he does see the practice as a soil conservation practice, he’s sticking with conventional for now.

“I watch Aaron with his organic fields and try to incorporate what he does,” he said in reference to Aaron Locker of the Kingsbury Farm in Warren, an organic farmer who tills conventionally.

Neill said that the conferences he’s attended do stress that earthworm activity, water drainage, air movement and the soil’s ability to hold nutrients and water do improve with no-till.

“The problem I have is that it’s supposed to be cheaper because you’re tilling less. But it’s complicated. The state’s suggesting a cover crop that you let grow almost to seed. I’ve been cover cropping for 30 to 40 years and my philosophy is that you should till the cover crop back into the soil when it’s at its best as feed for the animals. That’s when it’s younger. When it matures, it’s got so much cellulose that breaking it down takes too much nitrogen so you’re depleting the nitrogen in your soil.

Neill is in the process of converting his hay fields to organic fields and would not be looking to use an herbicide to knockdown a cover crop, but did note that some farmers crimp or literally knock down their cover crops in lieu of herbicides.

The Turner farm is further north on Route 100 and farmers Doug, Sharon and Joe Turner farm organically and conventionally.

“As an organic farm, we’re still farming conventionally and we’re tilling in cover crops and not planting Round Up-ready corn. No-till is relatively young, 15 to 20 years old,” Fred Turner said.

Hadley Gaylord, an organic vegetable and meat farmer, said his operation is small enough that he would not see any savings from switching to no-till methods.

“I know that no-till can be positive in terms of soil loss and erosion, though,” he said.

David DeFreest III said the family decided to go no-till for a variety of reasons. He went to college in central Pennsylvania where no-till farming has been widely used for 30 years on larger dairy farms.

MADE SHIFT TO NO-TILL

When he graduated two years ago, with a degree in finance and economy and returned home, he realized he wanted to farm rather than be a banker and with his family decided to make the shift to no-till.

“We decided to try it in an attempt to improve our soil quality. Plus, the state is pushing the practice and offering incentives. We’re the only farm in The Valley that is using it. It’s a long-term strategy that’s not going to benefit us right off, but hopefully throughout my lifetime it will,” he said.

DeFreest is keenly aware of the concern around using herbicides to knock down the cover crops.

“I’m on the same page as a lot of people who live here in terms of using herbicides and I wish we didn’t have to use as many as people are using. But it’s a tool and we use it as sparingly as possible. It’s just one tool,” he said.

“We talked to our agronomist about it before we made the decision to do it. He gave us the life span of glyphosate and how it gets absorbed and terminates the plant. It’s hard to say that it’s not harmful at all, but the benefits we get from not using all those other products outweigh the impacts of the herbicide,” he said.

He’s optimistic about how the system can improve soil quality, particularly how leaving the organic material and residue on the surface of fields will stimulate microbial activity and cause worms to work through the soil, creating pores and breaking up the compaction that can occur.

“It tough to be in dairy farming right now. Milk prices are bad. We have to strive to be as efficient as possible. But we can’t complain, we chose to do this because we enjoy the lifestyle of raising the crop and putting it through the animals and making milk – watching the whole thing unfold,” he said.