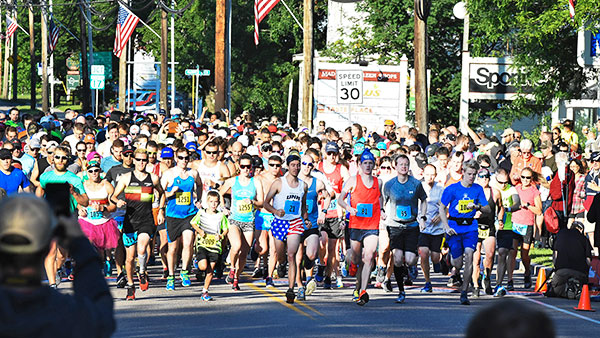 The Mad Marathon, Mad Half and Relays hosted over 600 runners on a gorgeous Sunday in the Mad River Valley. During the July 8 race they were supported by 300 volunteers at aid stations, road and bike marshals, Mad River Valley Ambulance Service, medical, food, awards and timing teams along with crowds along the course. Adding to the list of 28 countries visiting The Valley were runners from Belgium, South Africa, New Zealand and Russia.

Mad Half Walker Maria Deangelo, 50, of Saranac Lake, NY, took first place for the sixth time in the women’s field with a time of 2:44:02 and winning second place was Kristen Clyburn, 25, from Beaufort, SC. Placing third was Michelle Crompton, 50, from Napier, New Zealand, with a time of 3:03:46.

A Vermont single-age and five-year marathon record was set at the Mad Marathon. The new record holder in F71 as well as F70-74 is Marian Loftin of Mobile, Alabama, whose 4:49:20 was well under the old record for that age. In the five-year age group, her time was over 18 minutes faster than the previous record.

Relay winners in the Mad Half were Team Dunbar from Canada taking first, Texas Pronghorns of Texas running second and Team Ruhstrat from Germany placing third.

Top Vermont runners in the Mad Marathon were David Jette, 32, from Burlington placing 15th in a time of 3:21:49, Jamie Sheahan, 30, from South Burlington placed third and Holly Gordon from Montpelier was seventh.