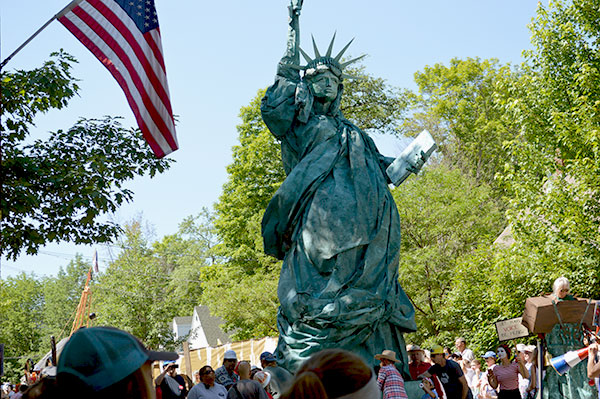 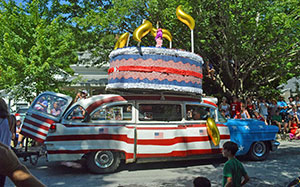 The tallest ever Prickly Mountain float – featuring Lady Liberty – was a highlight of this year’s Warren Fourth of July celebration. The annual event brought crowds to Main Street and Brook Road for the parade and street dance as well as the festivities at Brooks Field. The parade consisted of many different varieties of floats that all revolved around this year’s parade theme: "Happy birthday to U.S."

Floats ranged from local businesses, politicians, antique cars, fire engines, ski resorts and more. Each float had an influx of color and design, as crowds flooded the sidewalks and near banks trying to get a good view.

The difference in the Warren parade compared to neighboring towns was the political message that some floats carried. Political floats were spotted in between live music floats and giant renditions of different styles of birthday cakes that towered high above tree branches. Lady Liberty was seen almost in the cloud level of the sky, as her makers from Prickly Mountain helped to take her down every couple hundred yards in a shipping crate, which was labeled, “Ship to Citizens of France, Elysee Palace, 7008 Paris, France.” 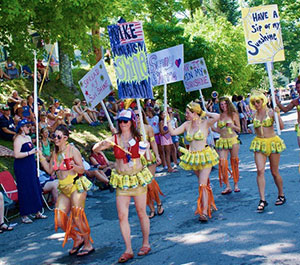 The crowd was also “feeling the Bern” as Vermont Senator Bernie Sanders marched through the parade with his team. Sanders, as always, was greeted with a roar of approval. Behind the crowd was another group supporting a “greener” Vermont as the marijuana law came into effect on July 1, with some parade members supporting an all green painted body with a “Jolly Green Joint” sign, looking like the Green Giant frozen and canned.

Official results from the judges are as follows: 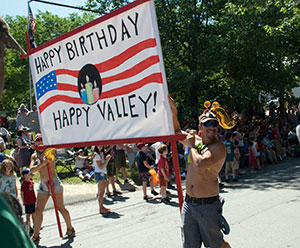 Best in Show: Sicky & the Crew.

Best in Theme: Sugarbush and its birthday celebrations.

Most Profound Patriotic Imagery (and tallest ever): Prickly Mountain crew.

Most Political: Temple of Dindor.

Best Bike: Chicks on Bikes (and a couple of guys). 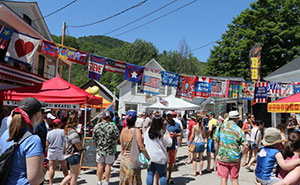 Most International: Au Pairs in Vermont. 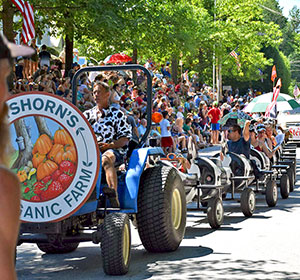 Most Hopeful for Our Future: Veterans of Peace.

Best Political Engagement: Vote on August 14 and all the political candidates.