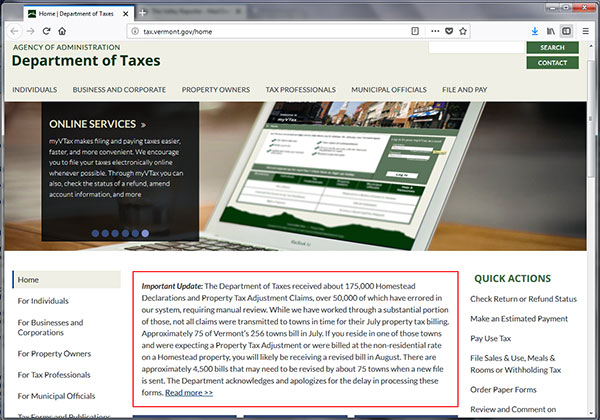 As a result of that delay, 70 towns in Vermont did not receive payments from the state that help offset the property tax bills of taxpayers who are income sensitized, meaning the state pays a portion of their property taxes.

According to Doug Farnham, policy director for the Vermont Department of Taxes, corrections to local tax bills were made as follows: 54 corrections for Warren, 43 for Fayston, 54 for Waitsfield, 41 for Duxbury and 42 for Moretown.

Because some towns send their bills later than others, only 97 Fayston and Warren taxpayers received bills that were in error. Local town clerks are expected to resend the incorrect bills. Farnham said that as of last Friday, July 27, the department of taxes had completed reviewing all income tax returns and issued towns notification of payments from the state for individual taxpayers.

At issue with the state’s ability to process tax returns was a software program that flags returns that may contain erroneous SPAN codes or other information. This year, that software flagged a lot of returns and Vermont tax commissioner Kaj Samsom is hoping to adjust that software going forward so it doesn’t flag so many returns.

Taxpayers who received incorrect bills are being advised to wait to receive a correct bill before paying since tax bills are generally sent out far enough in advance of their due dates.