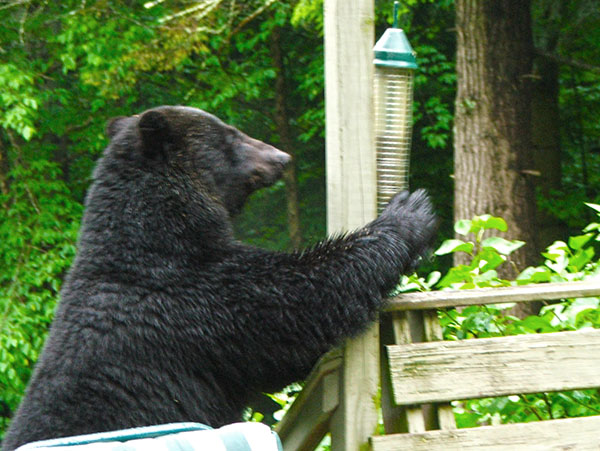 Vermont game warden Chad Barrett has some advice to offer.

“If your trash is mauled by a bear, talk to your neighbors about it so that everyone can take precautions. If the problem persists, call us and make sure we know about it so we can avoid what happened in Warren last week,” he said, referring to an incident in Warren last week where a bear had to be put down.

Barrett said he was called around midnight for a report of a bear in a car in Alpine Village in Warren. He said when this occurs it is usually because a window or sunroof or door has been left open. The owners of the car said that was not the case and reported that the bear was honking the horn and tearing apart the interior of the car.

He arrived on the scene, locating it by the fact that the hazard lights were on in the car and found the car windows steamed up, bear prints visible on the handle of the left passenger door.

“When I got to Tamarack Lane where they live, I could see the bear bouncing back and forth in the car. It was big, 250 pounds. I walked around and found bear claw marks underneath the door handle. The bear had apparently opened the door and pulled out a Baby Bjorn carrier and a diaper bag and rifled through those before leaving them on the ground and going back in. I can only imagine that the bear kicked the door on the way back in and it swung shut behind him,” he said.

He said there was no food in the diaper bag, but there was some fruit and baby food items in the car – watermelon and a half of a banana.

“I was trying to figure out what to do and the people told me that they thought the bear was here a few nights ago and that a bear had killed some chickens in the area.

“I said, that’s why we’re at this point, because nobody did anything to deter him. Why didn’t I know about this?” he asked.

He considered trying to open the car door to let the bear out, but the car didn’t have loop handles.

“But when I realized that he’d opened the door himself I realized I couldn’t let this bear live. It would have to be destroyed. This is a bear that had lost its fear of humans, killed chickens and entered a car. What if he let himself into a house or was in the back seat of a car that someone got into at 5 a.m.?” he explained.

“I considered opening the door and then shooting the bear, but by then the car had been destroyed inside. The seats were ripped down to the frame. I realized I’d probably have to shoot the bear in the car, through the back window, which is what I did. After the bear died, I pried the door open and pulled out the car seat and then the bear,” he said.

“I tried to come up with a different outcome. But this bear was now habituated and had been here multiple times. People have to be vigilant and lock cars and first floor windows and doors and secure chickens, gardens, compost and garbage,” he said.

The Warren incident is not an isolated one, according to Tom Rogers of the Vermont Fish and Wildlife Department. While searching for food in early July, a bear broke into a Killington home through an open window, and another Killington bear entered the Northstar Lodge through an open door. A Pownal woman awoke to the sound of a bear breaking through a kitchen window to access a honey comb that had been left within reach, while a similar incident occurred in Townsend where a bear broke into a kitchen freezer.

According to Barrett, bears don’t naturally break into homes. They must first have had experience receiving food from humans. The process of habituation begins with attractants that residents leave out such as birdseed, pet food or unsecured garbage.

“When bears get into garbage, pet food, beehives and birdfeeders without any consequences, their behavior escalates as they lose fear of humans and begin to cause more damage,” said Barrett. “Once a bear is conditioned to associate people with food, little can be done to fix the problem. Relocating bears is ineffective. Bears that have been lured into a neighborhood by one careless resident quickly become a problem for the entire community.”

GET TO SAFE PLACE

If a bear enters a home, Barrett urges people to get to a safe place and call 911. If a bear is near the house or is attempting to make entry, he recommends people make as much noise as they can to scare it off.

In addition to removing birdfeeders and securing garbage, Barrett recommends residents avoid giving bears an easy entrance by locking doors and shutting downstairs windows at night. Motion-activated lights and alarms can also be used to deter bears that wander too close to homes.

The Vermont Fish & Wildlife Department is asking the public to report all bear conflicts to the department’s website at www.vtfishandwildlife.com. Reporting an incident helps track problem areas and allows wardens or biologists to advise residents on ways to mitigate the problem. Residents are reminded that it is now illegal to feed bears in Vermont, even unintentionally.

“Black bears naturally search for food. That behavior will not change,” said Barrett. “It’s the people’s responsibility to keep human food inaccessible, so that bears remain healthy and wild.”