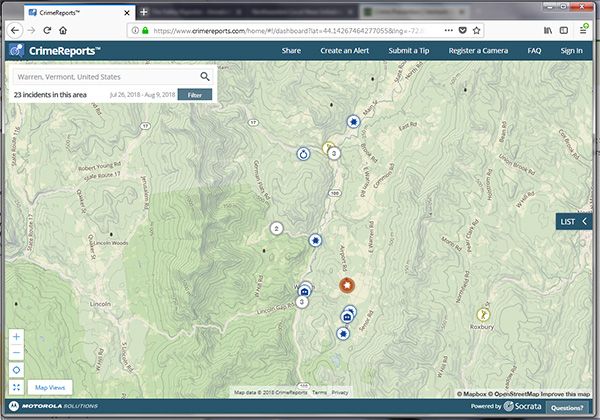 Vermont State Police are investigating a series of burglary complaints in Warren Village after an August 3 crime spree that involved multiple homes as well as municipal buildings.

Trooper Todd Stackhouse said last weekend’s crimes in Warren, while concentrated, were not new and said there had been ongoing issues reported since last May. In some cases, the properties being targeted are second homes and the break-ins are only noticed when homeowners return or caretakers check in.

“We’ve narrowed this weekend’s incidents down to Friday night, August 3. There were at least five burglaries or trespasses in Warren Village and an incident on the Sugarbush Access Road and Woods Road,” Stackhouse said.

The person on Sugarbush Access Road thought it was a bear and hollered enough to deter whoever it was, despite the pry marks found on her door, he explained.

On Main Street in Warren, burglars entered a home through a window and rifled through the house but did not take a lot of high-end items. The Warren Library was entered through the front door, which was pried open, and $150 in cash was stolen, but other cash was left behind.

The town office building was entered through a window that was unlocked and every desk, drawer and closet was riffled, according to town administrator Cindi Hartshorn Jones. Another door upstairs in the town office was kicked open and nothing was taken.

Stackhouse said that valuables were taken from a house on Woods Road and some guns were stolen while others were left behind.

“It’s kind of strange. Some of the residences that were broken into had narcotics in plain sight that were left behind. We’re developing an MO of coming in through windows and stealing some things, but leaving others behind,” he said.

People should lock windows and doors. But if thieves are going to get in, they’re probably going to break window. Being able to secure doors and windows helps though. Every place we’ve gone to hasn’t had any security cameras. Cameras can help deter criminal activity,” he added.

Troopers are asking anyone with information, or to report suspicious activity, to contact the Middlesex state police barracks at 802-229-9191.