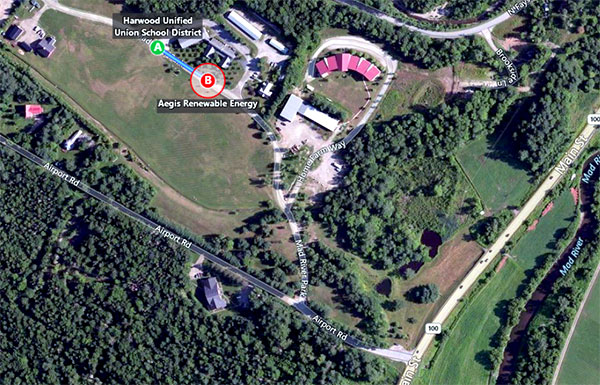 The board, at an August 8 meeting, met with representatives from Aegis to discuss the proposal. TJ Kingsbury, of Kingsbury Construction, has offered to host a solar project near Mad River Park next to both the HUUSD administrative buildings and the Aegis offices.

“There’s no risk at all and there’s a guaranteed 12 percent discount on credits that the school will get off of its electric bill. There really is no monetary impact to the school and there is a significant savings for the school district and school as well,” said Nils Behn, Aegis representative.

The project would ultimately result in an estimated annual savings for the Harwood Unified Union School District of $10,188. The school would get net-metered credits from the cost per kilowatt hour that would go on the school’s electric bill as a credit.

“The credit that we are getting is what the median credit that gets applied to our Green Mountain Power bill. There is a meter that allocates the solar to Kingsbury’s office and to us, and so there’s a median percentage that is set. Then we receive actual solar credits on our bill and based on this agreement I believe the splits is 85/15, so what actually we receive on our bill as a credit to our electricity, we turn around and we pay Kingsbury 85 percent of the credit we received and retain a percentage of the savings,” said Michelle Baker, HUUSD director of finance and operations.

The contract would be in place for 25 years with a loophole if the school finds another interested party to take on the solar project if the school no longer wanted to be involved.