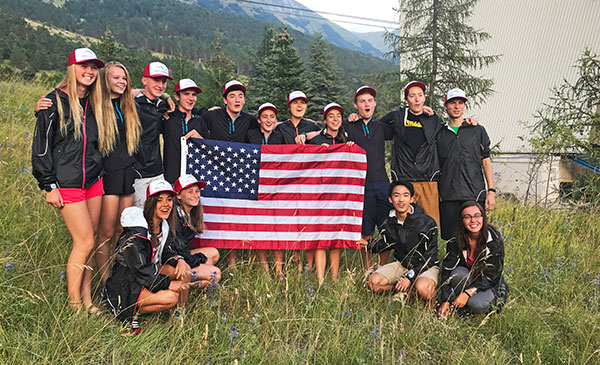 Father-and-son team John and Ryan Kerrigan, Duxbury, have been appointed as U.S. coaches for the 2018 Skyrunning Youth World Championships. They recently returned to the states after competing in the championships in Gran Sasso, Italy, alongside 19 other teams participating in the third year for the sport.

The races this year consisted of a vertical kilometer (VK) on August 3 and 15 or 25 km mountain ridge run on August 5. The races took place in the Gran Sasso region of Italy located 100 kilometers east of Rome. Gran Sasso (Big Rock) is also the site of the southernmost glacier in Europe. In some parts of the race, runners were on bare rock with no actual trail with minimal trail markers.

“We previewed all the courses with them. The sky run was basically like running from Lincoln Mountain to App Gap to Mountain Mansfield; the vertical kilometer was like running up Mt. Mansfield three times,” said Kerrigan.

This year the U.S. representatives achieved fourth place overall. Coach John Kerrigan said that with more teams actively joining the sky running sport, there is bound to be more competition.

“It was much more competitive this year and we maintained the same place so we were very successful,” said Kerrigan. The U.S. team succeeded in bringing home four medals overall: one gold medal, two silver and one bronze.

Sophia Sanchez, who represented the U.S. team from California, won in the vertical kilometer.

“She won the vertical kilometer for the 18 to 20 age grouping and she won by 3.5 minutes over the entire field, including the women 21 to 23. She burned up the course pretty well and it was her first experience sky running,” said Kerrigan. Vermonters in the competition included Brendan Magill, Moretown, who was ninth in the VK, John Henry Bardes was 21st in the VK, Erin Magill was 12th in the VK, and Naia Tower Pierce of East Burke was trail blazer/forerunner and first on course for the VK. She was also the youngest competitor.

“It was good intermingling for all the athletes from different nations; it was kind of like the Olympics,” said Kerrigan.

Kerrigan, who has been a successful coach at Harwood Union High School, enjoyed the experience of coaching athletes from all over the United States. “Personally for me, coaching was awesome. I got to meet coaches from all the other nations and made friendships and shared training stories. It was great,” said Kerrigan.

The coaching pair is already looking forward to next year’s race, as Ryan Kerrigan is in the process of putting together a team for the adult Skyrunning championships. The 2018 Skyrunning World adult championships will be held from September 13 to 15 in Kinlochleven in the Scottish Highlands,” said Kerrigan.

“It’s a lot different than cross-country running or track running, the terrain is very challenging, but the kids are hooked on it. They seem to want things that are more challenging,” said Kerrigan.

All results from the youth competition can be found online at www.skyrunning.com/2018-youth-world-championships-ranking/.