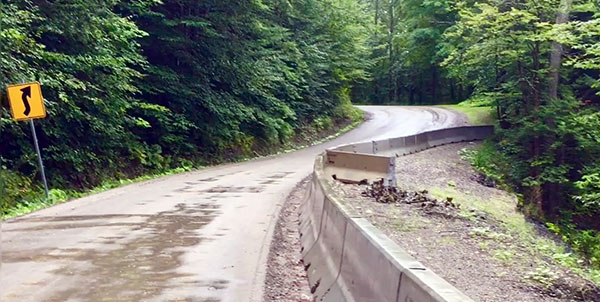 The town of Duxbury is working on the engineering to fix a lengthy road slide on Crossett Hill that has had a section of that road reduced to one lane since last July.

Road foreman Adam Magee said that the section of Crossett Brook is just past the Senning farm, when coming from the northern entrance to the road. Magee said that a significant swath of the road washed out initially during a June 2016 storm, which the town repaired.  It happened again in July 2017 and the slide worsened.

“The shoulder washed out and the road ended up down a steep bank,” Magee said.

The Duxbury Road Department installed jersey barriers along the length of the 100-plus foot slide, effectively creating a one-way road in that section.  The one-way section of the road makes plowing a challenge he said.

The town has been working with FEMA on that repair (as well as others from 2016 storms) and recently received bids to engineer the repair of Crossett Road. Duxbury’s town attorney is currently reviewing the bids for the engineering work.

Magee said that the scope of the work is beyond what the town road crews can do and said that a significant amount of it will need to be subcontracted out.

“It’s way over the basic work our crew does,” he said.