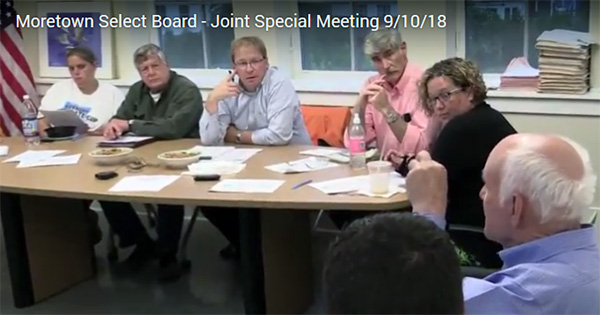 The Moretown Select Board has closed the public hearings on proposed subdivision regulations that will come before voters at Town Meeting next March.

The board, at a September 10 hearing, met with members of the development review board and planning commission and zoning administrator J.B. Weir to iron out final language and edits.

At a hearing in July, town resident David Russo voiced concerns about the regulations increasing the cost of development in Moretown as developers would add the permitting costs to the costs of land and homes.

Select board chair Tom Martin, commented that the select board was looking out for the best interest of the towns and the boards.

Carl Wimble, a community member who attended and spoke the July 9 meeting, said that he has land that would be affected by the proposed regulations.

“I know if we put this to a town vote it’ll pass because nobody knows what’s going on except for me, maybe Dave, and the planning commission, and the select board. Everyone else who has a small little parcel of land, they see this big chunk of land over here and they say, 'I really like that land like that. We should protect that somehow,' but they don’t realize that people have investment in that property and want to get money out of it sometime,” said Wimble.

Moretown has recently had two large parcels of land come on the market which has increased awareness of the development potential in the town. One lot is 189 acres off Hathaway Road and the other is a much larger, 8,000-acre parcel off Moretown Mountain Road. Under Moretown’s current zoning, which allows one house per acre, that could mean a lot of houses – even though both parcels are likely too steep to allow for development that dense. Weir said in an interview that awareness of those two parcels may be impacting the planning commission’s desire to get the proposed regulations before voters.

At the most recent Moretown Select Board meeting on September 10, Moretown Select Board chair Tom Martin offered to have each individual board send the subdivision regulations back to the planning commission to fix the grammatical language and then be sent to Cheryl Brown, the town administrator. The language was too ambiguous with some members of the individual boards seeking further clarity; modifications are due by October 1.