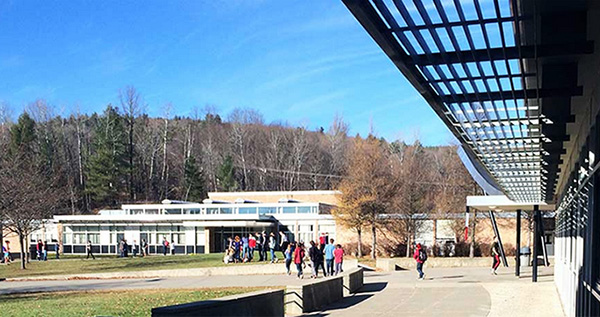 The cost of four options for the middle schools in the local school district range from $7 million to $17 million.

The executive committee is comprised of some members of the HUUSD Board, school principals, the TruexCullins architectural firm, and ReArch, the construction manager that the board hired. The cost of middle school renovations, regardless of which option is selected, are in addition to an estimated $19 million needed to upgrade Harwood Union High School.

In the first proposal, renovation would happen at Harwood Union Middle School with no work done at Crossett Brook and with no change in student status quo. Harwood Union Middle School would be expanded with the addition of two wings, one on either side of the existing middle school, and a renovation to the existing middle school space. There would be team spaces and administrative suites and the space would be self-contained. This plan costs an estimated $7,035,929 – subject to change.

The second option, would be renovation and additions to Harwood Union Middle School with no work to Crossett Brook, with the proposed wings, plus a new gym space attached onto the building and 10,000 feet of renovation to the existing middle school. This space would be self-contained. The new gym option would have an eating area for the middle school and new classrooms for health, art and music. This renovation would cost an estimated $12,498,688 -- subject to change.

Option three also involves work only at Harwood Union Middle School and features the addition of an entire second floor. The renovation would be the same as the proposed second option with an elevator access to the second floor. All seventh- and eighth-grade students in the district would attend Harwood Union Middle School, and Crossett Brook would host the Waterbury and Duxbury fifth- and sixth-graders only. This would mean the addition of new staff to accommodate the influx of students. The board members present expressed the dire need of more parking spaces. This plan would cost an estimated $17,471,489.

The fourth plan that TruexCullins proposed was a scope of work that focused solely on Crossett Brook. This would have all seventh- and eighth-grade students in the district attending Crossett Brook, along with the Waterbury/Duxbury fifth- and sixth-graders. The Valley fifth- and sixth-graders would stay put. This option would include a new addition with an option for a second floor, an art room, an option for a second floor makerspace, an administration space renovation, and a new electrical room that ReArch recommended.

Parking was a concern with this scenario as staff would need to be accommodated with an estimated 80 new spaces needed. The cost of this renovation would be $7,925,688 -- subject to change.

Principal Lisa Atwood told the group that bringing middle school students together sooner would help the transition into high school – which is hard enough, she said. The social impact of that transition, she said, impacts academics as well.

“If our two groups of students could come together earlier and transition as a program, collectively together into ninth grade, it would decrease some of those social challenges they have, some of the behaviors that we see,” said Atwood.

“It’s just coming together, trying to co-exist as new groups, and as much as we try to have opportunities at the middle level for these two groups to come together, it’s not the same as being in classes together, sharing the same experiences and having the same learning opportunities,” she added.

After going over these options with the community, some of those present had questions about any additions to HUMS – specifically expanding and building on the Class 3 wetlands that flank the building. Community members asked why such a proposal would be presented without even knowing if building on a Class 3 wetland was possible. HUUSD facilities director Ray Daigle told those present at the meeting that he’d be meeting with state officials on the matter the following day.

Daigle was unavailable for comment this week; however, Rosemarie White, board and executive committee member, said TruexCullins and ReArch do not have any additional information as both are in the process of submitting information to the state.

Peter Langella, Moretown, who recently resigned from the HUUSD Board, again urged the board to slow down this process.

“I really worry that the board will be voting to move forward with the middle school plan before anyone figures all that out. The board says, ‘We’re pausing redesign,' yet there’s still options on here where redesign is clearly still on the table -- because there’s excess space that needs to be filled. You’re going about the process in the wrong order, board members. You need to figure out all the answers, before you make a choice on the middle school that will then have a domino effect,” said Langella.

Other community members brought up the fact that the high school is in need of major repairs and renovations. Some said that the school is losing students annually due to the fact that parents don’t feel that it is up to their standards for their child’s education.

“I urge you with all of my being to find out the answers before you make a choice please. You're making a generational decision; you need to have all the answers and the community needs to know where all those dominos will fall before they could vote on that. At least this community member needs all that information before I could ever vote on any option you come up with. Please, find out the answers and give them to us so we can be educated and make a vote and look in the mirror and believe in the next day,” said Langella.

Those present questioned the cost of the proposed middle school work when added to yearly maintenance costs of the new spaces.

Yearly maintenance includes upkeep and cleaning. The yearly estimate for each plan would be as follows: option one, zero cost, as the plan is renovating with no addition; option two, $127,000 annually; option three, $221,000 annually; and option four, $45,000.