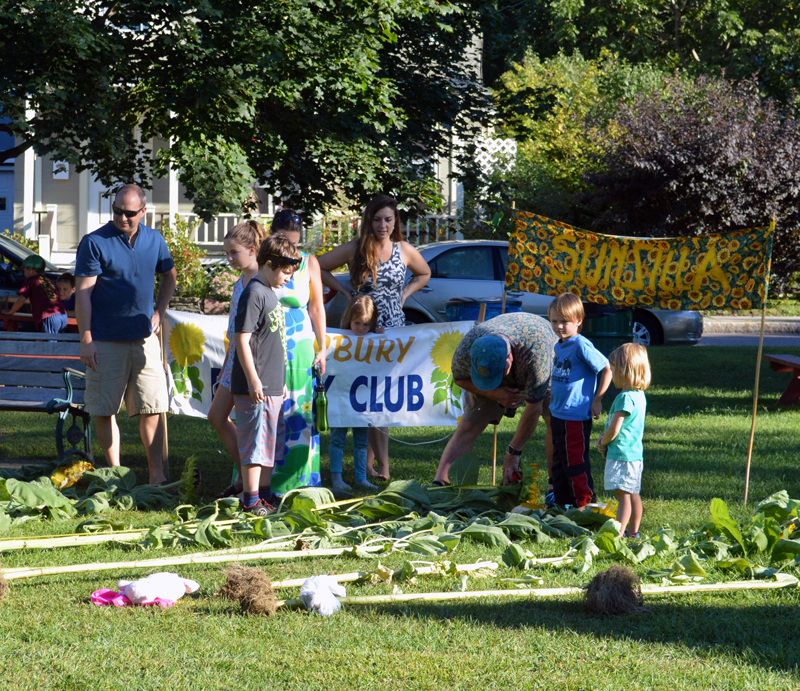 The Waterbury Rotary celebrated the 25th anniversary of the Hunt for Sunzilla, the Monster Sunflower competition on September 13 at Rusty Parker Memorial Park with a large crowd of 24 participants and their families.

Families brought their own garden-grown monsters to the park for judging and speculation in the aftermath of Thursday’s farmers’ market. The brightly-colored and sizable flowers varied in height and diameter and were judged for their length, diameter and the largest sunflower head.

The largest by far went to the Lubowld family, whose members Izzy and Jesse raised a sunflower to an enormous 15 feet ¾-inches. In second place was Natalia Roseioli with 12 feet 7 inches and in third was Andra Liberty with 12 feet 2 inches.

Largest diameter of the sunflower head went to Olivia Lora, with 14.25 inches. In second place was Franki with 13 inches, and Thatcher Roseioli with 13 inches as well.

“We gave out 20,000 seeds on Arbor day in conjunction with giving local schools, Thatcher Brook Primary School and Crossett Brook Middle School, a tree to plant in conjunction with Arbor day and kids received sunflower seeds. We contributed a bunch of seeds through other business as well, and people grew seeds on their own,” said Rotary spokesperson John Malter.

The Green Monster completion for the largest and heaviest zucchini also took place. The longest zucchini with a measured 20.25 inches belonged to Andra Liberty. The heaviest went to Christine Matusevich at 9 pounds 12 ounces.

After these contests, Rotary members offered a sunflower-spitting contest for kids whose efforts were judged by distance.