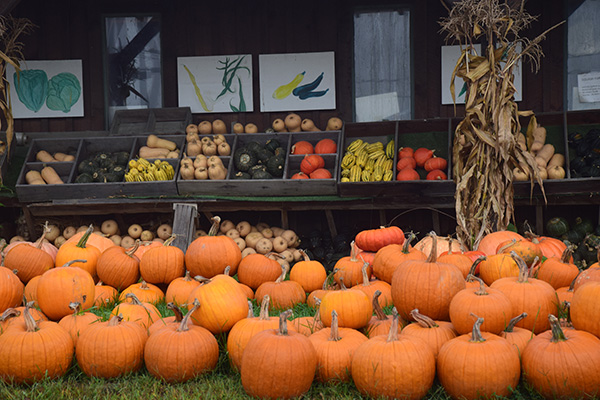 This year the pumpkin crop is bright and full for the picking as Valley farmers are open for business ready for pumpkin bakers and carvers to share their scary or delicious masterpieces.

This week The Valley Reporter sought out two local farmsteads, the Neill Farm and Hartshorn’s Organic Farm, both in Waitsfield, to ask about the pumpkin planting, harvesting and variety.

“I’ve been growing pumpkins for a long time,” said Elwin Neill with a laugh, “probably 30 years anyway.” Neill’s farm is located on the back side of the Mad River on North Road, where the historic Neill barn was flattened by straight-line winds earlier in the summer.

When asked what kind of variety pumpkins he grew, Neill joked, “I’ve got big ones, small ones and bigger ones.” When asked how many pumpkins he had harvested this season, he said they numbered in the thousands.

Neill commented that the crop this season was regular, Neill did say that the season was a little dry, but not too early or late as his crop was not affected by any frosts or heat in Vermont’s sometime fickle summer climate. Planting takes place in May for the Neill farm.

David Hartshorn, owner of Hartshorn’s Organic Farm, said that his pumpkin harvest was a little early this year due in part to the warm nights and hot days.

When asked how many pumpkins he had this year, Hartshorn commented, “Too many to count.” Hartshorn has pumpkins for carving and baking as well as novelty pumpkins.  Like Neill, Hartshorn planted his pumpkins in the spring ranging from late May to early June.

“We’ve been spoiled for several years having it so warm so late without a frost, so, I can remember when I was a kid and we would get a frost at the end of August, and we thought that was normal, but the new normal is having a couple small frosts. I don’t think it’s any earlier than it ought to be as far as the pumpkin crop, it is where it ought to be,” said Neill.

Hartshorn who has been growing pumpkins for over 40 years recalled how his pumpkin history began with a simple pile of manure.

“When I was a pretty young guy, somebody gave me some pumpkin seeds and I threw them in the manure pile and forgot about them and then the next fall we had a freeze and all the leaves dropped and here were these giant pumpkins.  I hauled them out and put them on the porch because I was pretty proud of these big huge pumpkins and people started pulling in and taking pictures and buying them – that’s how I got my start,” said Hartshorn.

Hartshorn is hosting a pumpkin festival this Saturday, September 29, at his farmstand at 11 a.m. to 4 p.m.