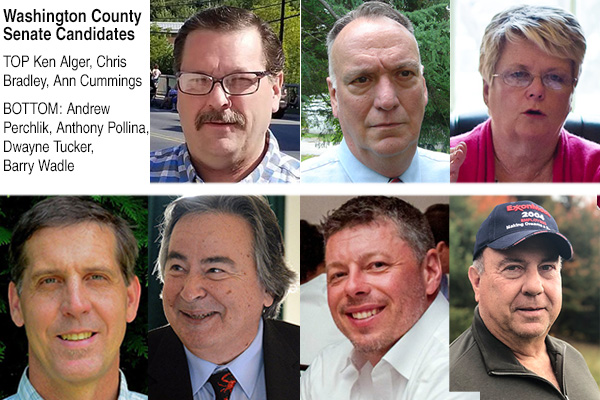 The Valley Reporter: Why are you running as a Democrat, Republican, Progressive or Independent?

Alger: I am running as a Republican because this party represents most of the values I identify with. Vermont Republicans believe in one nation under God, individual liberty, personal responsibility, limited government, compassion for the needy, low taxes, a free market economy and local control. Although I am running as a Republican I would not let partisanship stand in the way of advancing good sound legislation.

Chris Bradley: I wrestled with myself for quite some time as to whether I should run as an Independent or as a Republican. In the end, I opted to run as a Republican as I felt that my alignment was more in line with the core Republican values of small government and fiscal conservatism, in addition to the consideration that running a campaign would be expensive, and I would be likely to get more financial support running as a Republican than as an Independent. I could not possibly run as a Democrat as I find that my values do not align with liberal policies and approaches.

Ann Cummings: I am running as a Democrat because the Democratic Party has traditionally represented the interest of the people. When I began my political career, there were only two choices: Republican or Democrat. Like the Progressives. I support the right of working people to receive a living wage and good benefits. I think the widening income gap between the rich and working people is the biggest challenge we face. I also understand that in order to provide good wages and benefits, businesses must make a profit. In a state where 90 percent of our businesses have 20 or fewer employers and many small employers are struggling to make ends meet, this can be a challenge

Andrew Perchlik: I’m a Democrat/Progressive candidate because these two parties are aligned with my values and goals to increase our common prosperity, work against injustice and ensure a healthy environment for our children and grandchildren. I choose to seek the nomination of both parties as I believe that working together the Democrats and Progressives will allow Vermont to harvest more success than working separately or trying to force both parties’ members into one party.

Anthony Pollina: I run as both a Progressive and Democrat. These parties essentially share the same values and are dedicated to standing up for social and economic justice and for policies that support working families, including affordable, universal health care, higher minimum wages, paid family leave and a willingness to raise revenue to clean up our waterways.

Dwayne Tucker: I am running as a Republican because of the overwhelming support from the GOP. We as Republicans stand for equal opportunity and strive for a state in which everyone can succeed. Blue collar workers are the life force of this state. Republican officials are the best advocates for our state and the people that make it work.

Barry Wadle: I am running as an Independent because I do not want any allegiances. My campaign is self-funded for the same reason. I want it clear that my decisions are for what is best for Vermont, not a party of campaign donors.

The Valley Reporter: Do you support the gun law that Governor Phil Scott signed into law this year? Why or why not?

Alger: I did not support the gun laws passed by the Legislature and then signed by the governor. The laws were poorly written and rushed through. The laws passed are largely unenforceable and have a damaging financial impact on Vermont sport shooting clubs. They are unconstitutional and there are already two lawsuits challenging this law.

There was an opportunity to actually make our schools safer with this legislation and the legislators crafting the bill threw that away in order to send a message to firearm owners and enthusiasts. That message – we don't care about you. Vermont used to be a place where we continually advanced the rights of Vermonters; this past legislative session diminished these rights. We need to use common sense when legislating versus emotions to come up with practical solutions that work.

Chris Bradley: With the exception of S.221, which I do support, I emphatically do not support any of the other bills that were passed. In point of fact, as president of the Vermont Federation of Sportsman's Clubs, I actively fought against them, and I am also a plaintiff in the court challenge against the magazine ban portion of that bill, which I am confident we will win. The other provisions of S.55 (which became Act 94) will do absolutely nothing to prevent the type of activity that they were theoretically designed to address (school shootings), but they do hinder and prevent law-abiding citizens from exercising their God-given right to defend themselves.

Ann Cummings: I voted for last year’s gun laws. To me it was a matter of balancing the rights of gun owners to own firearms and the rights of my kindergarten-age grandsons not to have to sit on the floor in a dark, locked classroom practicing what to do "when a man with a gun comes in our school." I know these laws won't solve the problem, but they will make it a little more difficult for people with a history of violence or instability to acquire guns. But these laws are not enough. We must continue to expand our ability to identify individuals who are struggling with anger and despair and help them before they act out violently. It will take time and effort, but we can't afford not to do it. No child should have to be afraid to go to school.

Anthony Pollina: I support the new gun laws. While Vermont is a relatively safe place it’s important that we do all we can to ensure that safety continues by keeping firearms out of the wrong hands. The new laws do that without interfering with the ability of responsible gun owners to own and use firearms.

Dwayne Tucker: I absolutely do not support S.55 or any new gun law for that matter. Vermont has the lowest crime rate in the entire country. We have never had a gun control issue in my 43 years of being a Vermonter. S.55 is a useless law; the only people it affects are law-abiding citizens.

Barry Wadle: No, I do not. S.55 was unconstitutional and was rushed through without reasonable consideration. Not only was it unconstitutional, it accomplished nothing besides hindering the Vermont way of life. I was at the State House when the bill was passed and from where I was sitting it was clear that the vote did not pass. Mitzi Johnson quickly dismissed a motion for a recount. I was disgusted by this and it became a main factor in my decision to run for Washington County Senate.

The Valley Reporter: What path do you see for creating a way to tax and sell legal marijuana in Vermont?

Additional tax revenue will most likely be utilized by having added a new bureaucracy to regulate the substance. At some point the state will need a new substance abuse and treatment program, new testing for driving under the influence, etc. It should be regulated similarly to the way we regulate alcohol if the state is inclined to do it. I am not sure this will be the gold mine it promises to be.

Chris Bradley: I want to be clear: I did not support the legalization of marijuana, as it remains a federally regulated drug. Last year, however, the Democrats and Progressives opened up this can of worms, thereby exposing Vermont to all of the headaches that will be associated with legalization, but no revenue to offset the obvious increases needed for law enforcement, education and prevention. We now have no choice. We must entertain the notion of taxing and regulating pot so that the state can begin to receive revenue that will be needed to ensure adherence to the law, but also provide revenue that will be needed to assist law enforcement, address education and prevention. Ideally, some of this revenue may also be used to decrease our debt.

Ann Cummings: I voted for the original Senate bill that established a system of licensed growers and retailers, with appropriate taxation. I understand that we do have a significant subculture that has been growing for years. But now that marijuana is legal we have to establish enough quality control to protect the public. We also need to cover the increased cost to law enforcement and for prevention efforts.

Andrew Perchlik: I do not have a plan to propose at this time, but I do support finding the best path to create a tax and well-regulated cannabis market in Vermont.

Anthony Pollina: In the Senate, I have supported proposals to tax and regulate by making available a limited number of licenses to grow, distribute and conduct retail sales of marijuana. We should focus on Vermont-owned operations and prohibit as much as possible large, national or international operations. The revenue generated should go first toward enforcement and education with the remainder directed at supporting our state colleges. Given that Quebec, Massachusetts and other neighboring states have or will soon establish tax and regulate systems, it’s important that Vermont move forward soon.

Dwayne Tucker: Creating a tax to legally sell marijuana in this state is a slippery slope. Currently, Vermont's legislators do not have the capacity in a business sense to put together a business plan for that specific purpose. Before Vermont can tax and regulate a controlled substance, we first need to stand up for our law enforcement and continue to pursue a method to regulate it from a law enforcement standpoint. I see it as a great means of revenue in our state, but I can also say that statistically speaking, there will be many more accidents and driving under the influence instances. Washington County, Vermont, has the highest DUI rate per capita of the entire United States of America; this is not something to be proud of.

Barry Wadle: I believe that a regulated retail market needs to be established, similar to the way we treat alcohol. That being said, the tax needs to be reasonable, one that enables retailers to not be undercut by a black market. This reasonable tax could help pay off our states deficit and deflated pension funds. The other advantage to this approach is quality control of the product. Consumers will be able to know what it is they are buying. Finally, a regulated market could be a tourist draw to our state and increase revenue.