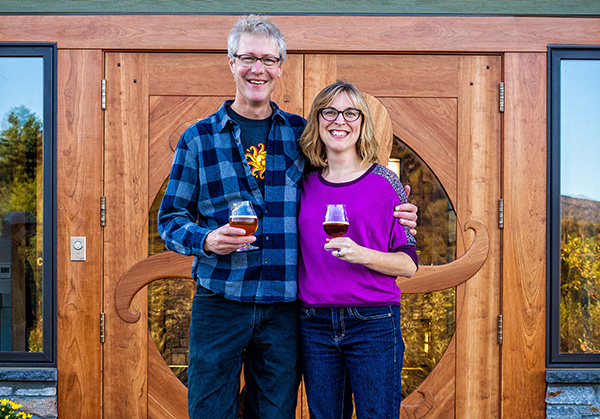 After a very well-attended soft opening on October 18, Lawson’s Finest Liquids opened to the public this week with a quiet announcement on its website, which quickly went viral.

Owners Karen and Sean Lawson opened their new taproom, brewery, retail store and beer garden on Carroll Road in Waitsfield after two years of planning and preparation. At the soft opening and throughout the first few days of operation, visitors sampled beer as well as cheese and meat tasting plates plus soft pretzels and other snacks.

The taproom features a soaring timber frame made by Mad River Post and Beam, a floor-to-ceiling chimney and two-sided fireplace, a custom bar and mural and Vermont slate and marble throughout.

There’s a kids’ play area with old-style video games beyond the fireplace. The company offices are sleek and modern with a break room along the back (western) wall of the building.

There are eight, 80-barrel brewing tanks, roughly the size of small space ships in the brewery. Each 80-barrel tank (and they are English barrels) holds 2,400 gallons or 800 cases of 16-ounce cans.

Lawson’s Finest opened with 12 beers on tap including the well-known Sip of Sunshine and Super Session and also Hopzilla, Knockout Blonde ale and more. In addition to beers on the regular production line, Sean Lawson said they will be developing new beers with names that represent The Valley and Vermont.

“We’re working on Scrag Mountain Pilsner in honor of the source of the water we use to make our beer. We’re also developing an App Gap Saisan and an Above the Clouds beer that reflect the fall phenomena of a layer of fog on The Valley floor while it’s clear above the clouds,” Lawson said this week.

Lawson’s Finest is open seven days a week from noon through 7 p.m.