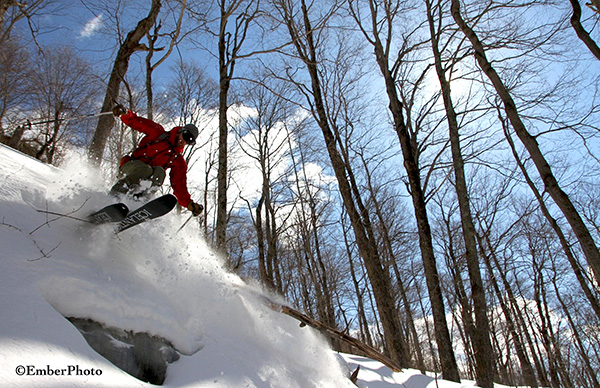 Retaining their independence helps Sugarbush and Mad River Glen contribute to the character of The Valley while helping shape its business climate. That was the word from resort leaders and others in the industry who came together for a conversation on the state of the industry hosted by Sugarbush Resort.

The event was open to the public as a way to share news of what is going on in the industry and answer questions from the public.

Opening the forum, Mahar discussed ski industry impacts, their watch list, numbers in attendance for National Ski Day, trends in the industry and the impact of tourism in the state.

Mahar emphasized that there are many hoops a ski industry has to jump through to make a business successful. She cited demographics, cost and efficiency in permitting and power costs, though Vermont does have a lower power cost. All season availability of workforce, labor costs – which are the single most expensive cost for the industry – affordable housing, and an aging management in the industry were also mentioned.

Smith continued, detailing some of the challenges resorts face as well as specific details about Sugarbush.

Smith noted that consolidation can be good and bad for ski areas. He voiced support for collective passes such as the Mountain Collective which allow skiing at 17 resorts in the East and West, including Sugarbush, yet noted that by remaining independently owned, resorts can better work with and within their communities.

Smith raised concerns about staffing and housing for his employees. Looking into the future, Smith said that the resort might be forced to build its own employee housing. The biggest expense to Sugarbush in general is the cost of employees.

Forty-seven percent of Sugarbush revenues go to employee wages, 12 percent to payroll tax, 6 percent to workers’ compensation, 4 percent to health insurance, and 5 percent electricity. Smith said that in a future projection the electric costs could be lowered, while workmans’ comp costs can be managed through an employee wellness program. Medical costs, he said, are an area of increasing concern.

Mad River Glen’s Lillard and Friedman discussed creating and maintaining not just a resort but a community at Mad River Glen, one that is now skier-owned and, while sustainable, they are working hard to keep it that way.

The topic of climate change was raised and Smith said that the industry can’t worry about things they can’t control but can try to reverse it by doing what they can.

The team from Mad River Glen said that managing the soil in the off season as key and that trying to maintain as much natural snow as they can is important. Mahar said that diversifying the resort business off-season recreation activities would benefit them.

A question from state representative candidate Kari Dolan about the importance of outdoor recreation as an economic driver was answered with plethora of possibilities.

Mahar mentioned putting Vermont on the map for a major mountain biking destination, highlighting things such as the new trails at Blueberry Lake, hiking, snowshoeing and birding. Smith said that the Mad River Valley is a wide canopy to be painted.

This was the first of the series of community dialogues presented by the Mad River Valley Chamber of Commerce.