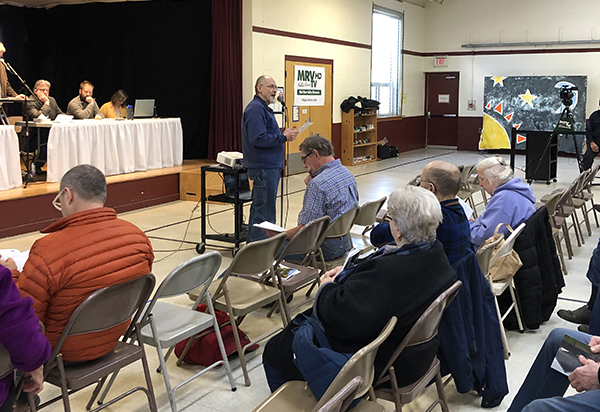 His March 5 Town Meeting proposal came after Waitsfield Conservation Commissioner Ted Joslin made a motion to add $10,000 back to the budget, explaining that the town was able to leverage significant grant funding for conservation and recreation projects, using the annual $10,000 town contribution. He explained that access to those funds is critical when time-sensitive conservation opportunities arise.

After his motion, many local voters spoke in favor of adding the money back, including Al Carr, Kurt Lindberg, Liza Walker, Mike Sharkey and Leo Laferriere, also a member of the town conservation commission.

Select board members explained that their goals call for level funding the budget to the extent possible and reducing the town’s debt overall. Regarding funds for the restroom, recreation and conservation fund, board member Jon Jamieson explained that the board moved that $10,000 to the road crew’s budget due to a need for additional funds for contracted labor in the summer. The select board also pointed out that the conservation commission had over $100,000 in its own accounts. Conservation commissioner Leo Laferriere explained that those funds were from private donations and were earmarked for trail maintenance and expansion.

Fred Messer called the question on Joslin’s amendment and Hartshorn called for a paper ballot on the question, but that proposal failed when only three of the necessary six voters concurred. It passed on a voice vote causing Hartshorn to rise and call for his own budget amendment – the $25,000 for the town’s paving reserve fund. Planning commission chair Steve Shea asked what was currently budgeted for paving and was told $50,000. Resident Cindi Hartshorn Jones urged the town to follow Warren’s lead and bite the bullet in terms of getting roads up to speed and then simply maintaining them versus waiting until they are so degraded that they require rebuilding. Road commissioner Charlie Goodman said that estimates to fix the town’s 3 miles of East Warren Road is about $750,000.

This is the third year in a row that the select board has removed the $10,000 earmarked for the restroom, recreation and conservation fund, only to have voters amend the budget from the floor of Town Meeting and add it back.

Voters discussed the cost of plowing sidewalks as well as the frequency, before breaking for lunch.