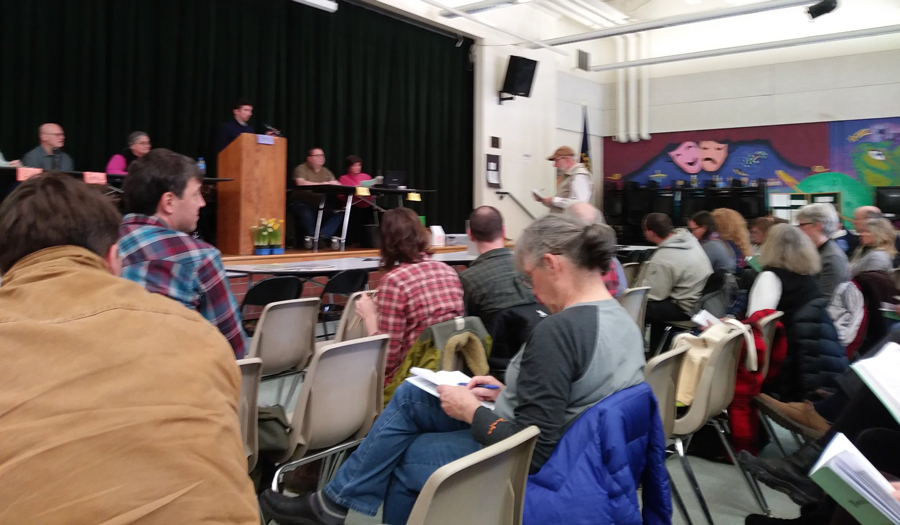 Duxbury Town Meeting began with the Pledge of Allegiance and a moment of silence for the dearly departed. Donny Welch spoke briefly about the Duxbury Historical Society and their goal to acquire the South Duxbury Church and Temperance Hall.

Board members were visibly pleased with the results, high-fiving each other after each one was re-elected, a gesture some in attendance found unseemly.

During the budget discussion, a motion was made to increase the budget amount for sand by $8,000, as Duxbury is currently out of sand. During this discussion, seemingly out of the blue, Magee brought up a new issue and informed the voters that the town garage is deteriorating at an alarming rate. He stated the roof has multiple leaks, that engineers claim the building could not withstand winds greater than 35 mph, that the back wall has caved in and that every morning they fear showing up to work to find the building completely collapsed. He called it an "impending disaster."

The board was peppered with questions about how much repairs and/or renovations would cost, even ballpark figures, but had no answer. Board members insisted they needed $10,500 for architect and engineering plans. A motion was made to add $10,500 to the budget, but the board said the funds would come from FY2019. Voters suggested putting money in the capital reserve for the garage or in next year’s budget, but the board responded that it would take 10 years to save enough and that this issue will requre a bond vote.

One voter stated that the board has known of these problems for years and asked why they have waited until it is a crisis to bring it up. The board received a letter from an engineer about the garage in Feburary and voters asked if anyone read it.

A voter also asked if the town has adequate insurance on the town garage. The board said they do have insurance but didn't quite say that it would cover a catastrophic failure of the building.

The meeting adjourned shortly before lunch.