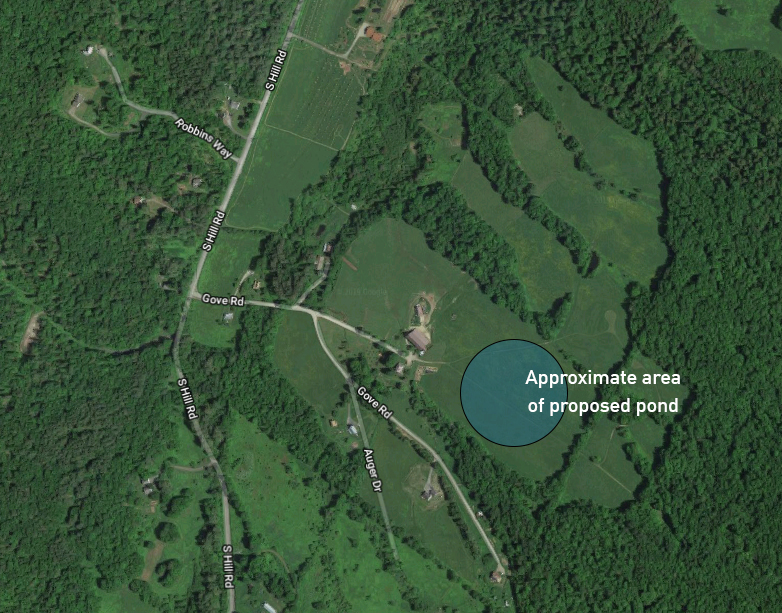 At the last Moretown Select Board meeting, board members gave conditional approval for the construction of a new pond at the end of Gove Road, off South Hill Road.

The Moretown Select Board, at a May 6 meeting, heard from Dan von Trapp, who came before the board and asked that a permitting fee be waived in exchange for making that pond available to the fire department for fire protection.

Von Trapp and his wife Jordan have a farm on Gove Road where they host weddings and events and raise food. They are in the permitting process to construct a pond on the property and are looking to strike a deal with the town to waive permitting fees.

The pond, which will be built by von Trapp himself, will be east of his house and past (uphill) from his barn. The cost to construct the pond is similar to that of a house, charged per square foot. The total cost of the permit would be $1,250, and a rough estimate of the pond construction would be $10,000.

Von Trapp also initially asked the select board to waive the fee due to other costs involved with the project. An engineering fee of roughly $700 and a development review board (DRB) application fee of $275 are also needed for this process.

Von Trapp proposed that the town fire department could use his pond for emergencies and offered to have a pump installed for the emergency vehicles. He said that if the town highway department wanted to add materials to the existing road so firetrucks would gain better access to the pond, they could. There is a patch of road where the town road ends, roughly 75 feet that would need to be improved as it is currently too soft for vehicles. Von Trapp said he would not have a problem with this if the town would pay for the material for better access.

Board members advised von Trapp to ask the fire chief, Stefan Pratt, about his thoughts on the matter before they came to a decision. The fire department was holding a meeting on May 6 as well.

A certificate of safety provided by a licensed engineer is a requirement for DRB approval of a pond with a berm. Specht suggested that the select board consider using DRB conditions of approval for the project to ensure town fire department access to the pond for fire suppression purposes instead of deeded access rights, which may have higher legal fees. Specht also added that the town doesn’t charge for pond depth.

As a berm is a conditional use, DRB needs a certification of safety. The town needs a legal agreement with von Trapp, which Specht recommended a conditional use by the DRB, as it would be cheaper than involving a lawyer.

After consulting with the fire department and gaining their consent, von Trapp received conditional approval for waving the pond permit structure fee subject to final approval of the full board at the next meeting and the decision with the DRB. The intention is to the keep the $275 fee from the DRB.

Moretown road foreman Martin Cameron said that for the 75-foot section of road that is 18 feet wide, adding 1 foot of gravel and 6 inches of topcoat and trucking would cost roughly $1,775, not including the town’s time.