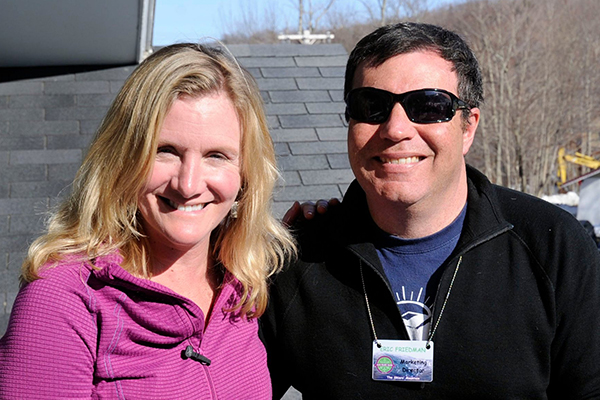 After 24 years, Eric Friedman, Moretown, has left his position as marketing director for Mad River Glen to accept the executive director position at the Mad River Valley Chamber of Commerce.

He replaces outgoing executive director Jasmine Bigelow, who is leaving at the end of this month.

Friedman is excited about the opportunity to bring his enthusiasm for Mad River Glen and his marketing skills from the microcosm to the macro when he takes his new position.

“I think it’s really important for the entire business community to embrace and support what we’re trying to do at the chamber. Everyone, if not directly then indirectly, is dependent on tourism, primarily, secondarily or in a tertiary way. All of us benefit from tourism. We all have skin in that game and we all benefit from The Valley having a cohesive presence online and a website and visitor center,” he said.

He is also very impressed with the visioning and strategic planning that the chamber board of directors has undertaken in the past several years and is excited about the momentum that the organization has right now.

“I think that portends well for the future,” he said.

Friedman is no stranger to the chamber, having served several terms on the board and having helped institute the chamber’s Community Sponsorship Program (CSP), a voluntary business/contribution program that provided $250,000 in marketing funds for the chamber at its peak.

“I was disappointed when it was dismantled, but I feel that the chamber has reinvigorated itself and has a new mission. The foundation they’ve built is solid. Jasmine did a good job of bringing it and the board back from the brink,” he said.

At MRG, Friedman was well regarded for his skillful use of publicity and spreading the word about the skier-owned cooperative on a shoestring budget.

“My skill set is marketing and public relations and utilizing a small budget in a way that comes together to help the community,” he said.

He said it was hard to leave Mad River Glen after so many years, but said he was excited for the opportunities that this job represents.

Friedman got his start at Mad River Glen as a volunteer with former general manager Boomer Mumford when he offered to write a press release about the formation and success of Mad River Glen’s skier cooperative.

“I went to Boomer and said that the co-op was a really cool story and asked about a press release. I volunteered to write one which led to Boomer offering me a job for 10 hours a week. Not long after, he was complaining about things not getting done and at the end of that season I was offered a full-time job in public and shareholder relations,” he said.

Friedman worked through Mumford’s term, that of Bob Ackland, Jamey Wimble and currently Matt Lillard. He’s proud of the work he’s done, specifically the success of the ski area’s cooperative ownership model but also for returning Mad River Glen to the forefront of the ski industry.

He’s proud of the success of the Mad River Glen 12-and-under ski program, which he pitched to the co-op board.

“I staked my job on it. And it was the single most important thing the co-op did in terms of rebuilding its skier base. It’s been better than I ever imagined. It’s one of the most successful in the country. Our freeski and race team always reload, never rebuild. The program is the centerpiece of the renaissance of the mountain,” he said.

Friedman is currently traveling with his wife, Holly Zanes, to graduations of his stepchildren. He has two children with his first wife, Lisa Danforth: Ben, 21, and Eli, 19. Both are in Bellingham, Washington, attending college.

Friedman will start at the chamber June 10. He said he’s looking forward to riding his bike to work to the chamber office on Bridge Street in Waitsfield, something he’d have been less enthusiastic about when working at Mad River Glen.