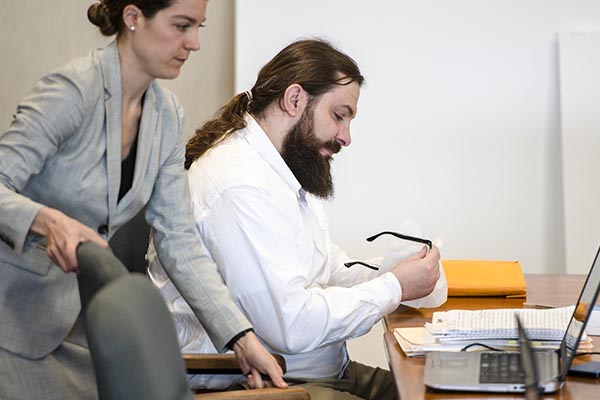 The defense in the Steven Bourgoin trial continued to present its witnesses this week with two doctors testifying that the 38-year-old Williston man was insane at the time of the October 2016 crash when he drove his car the wrong way on I-89, killing five local teenagers.

Dr. David Rosmarin and Dr. Rena Kapoor testified this week on why they believed Bourgoin was insane during the wrong-way crash and then a second crash after he’d stolen a police cruiser and drove it south on I-89 before turning around and driving the wrong way back to the accident scene where he crashed the cruiser into the truck he had been driving earlier at over 100 miles an hour.

Rosmarin testified in Vermont Superior Court that Bourgoin suffered from a mental disease and could not appreciate the criminality of his conduct or to conform to the requirements of law. He said that means he was insane under Vermont law.

Kapoor testified that she came to believe Bourgoin was insane at the time of the crash after examinations and reviewing Rosmarin’s work.

Bourgoin has denied five counts of second-degree murder for crashing his northbound 2012 Toyota Tacoma truck into a southbound 2004 Volkswagen Jetta with the five teens about 11:55 p.m. on October 8, 2016.

He also has pleaded not guilty to two subsequent misdemeanor charges: aggravated operation of a Williston Police cruiser without permission by taking it from the accident site and later reckless driving of the police vehicle by crashing it into the first crash scene.

While the state must prove guilt beyond a reasonable doubt, a defendant only has to show insanity by a preponderance of the evidence.

Rosmarin said Bourgoin had been facing depression for several years and was really beginning to spiral downward in the month leading up to the crash. He thought he was being controlled by lights on ATM machines, by the music on his car radio and that the static on his television was sending him Morse code messages.

Bourgoin thought he was part of a special government mission and feared that his life could be in jeopardy and that his house might be burned down, the doctor said. Bourgoin also used hand signals out the window of his truck to what he thought was a drone flying overhead, the doctor said.

Even after being admitted to the hospital with life-threatening injuries, Bourgoin still thought it was all part of a government mission. He needed to figure the special code to get out of the hospital, the doctor said.

“What do I have to order on the menu to get out?” Bourgoin was contemplating, Rosmarin said.

The state tried to show that he might have been suicidal, but Rosmarin countered Bourgoin was wearing a seat belt, wanted to be with his daughter, Izzy, and was looking at buying a house in Rutland, where he grew up. Bourgoin also was expecting a $40,000 inheritance from his grandmother, the doctor said.

Rosmarin is one of two experts expected to testify that Bourgoin was insane at the time of the crash. Dr. Reena Kapoor of Yale University was scheduled to testify Wednesday. She was retained by the prosecution, but when she made the same finding of insanity, the prosecution told her not to write a report, Rosmarin said.

The state has switched to Dr. Paul Cotton as its expert, but Rosmarin said he was not impressed by his review effort. He said Cotton did not look at various records, watch or listen to interviews conducted with Bourgoin or do the standard work for regular evaluations.

State’s Attorney Sarah George attempted to show Bourgoin had given inconsistent statements, including driving to the Capitol Plaza Hotel. He has provided statements that he drove there on the Thursday night or Friday night before the Saturday night crash.

For the second day Burlington lawyer Tris Coffin of Downs Rachlin Martin law firm, which represents the hospital, was among those observing the testimony, including about when Bourgoin eloped from the medical center when he went for help during a morning visit.

Katims and co-counsel Sara Puls presented six other witnesses, including five people employed at the UVM Medical Center on the day of the crash.

Registered nurses Margaret McLaren and Victoria Poulin, who now works at Central Vermont Medical Center, testified about their contact with Bourgoin. McLaren said Bourgoin got into a secure area when he arrived about 8:40 a.m. and she called security and he later left.

Poulin said Bourgoin was admitted to the hospital for mental health issues more than 12 hours before the crash.

Poulin said he was “in some sort of mental health crisis.”

Lauren MacNee, a physician’s assistant, took the stand to talk about her interaction with Bourgoin.

“He came to the hospital to be in a safe place,” MacNee said. He was placed in scrubs but would not let the medical staff remove his clothes, which included his passport. Bourgoin believed he might need the passport for the unknown special government mission.

She said Bourgoin declined a chance to have some mental health review and was told to follow up with his doctor. MacNee said the plan was to type up discharge papers, but when they went back to check on him, Bourgoin was gone.

Joseph O’Connor and Joseph Miller, who were working as hospital security guards, testified about their observations and contact with Bourgoin during two visits between 8:30 and 11 a.m.

She said after all the various tests a determination was made that there was no evidence he was faking psychotic reaction.

Bourgoin received serious injuries in the crash, including a fractured spine, various facial fractures and a broken hip. He also had seizures due to his head injuries.