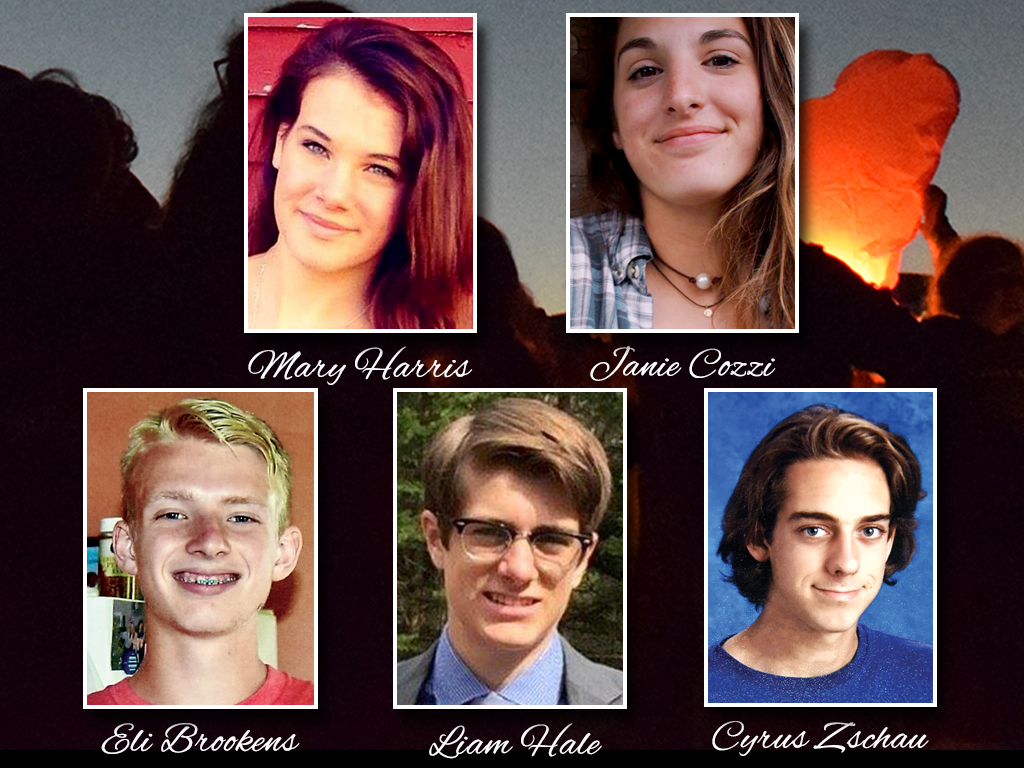 Bourgoin showed no emotion and said nothing as each verdict was read on Wednesday, May 22.

Bourgoin’s defense team maintained he was criminally insane at the time he drove his northbound 2012 Toyota Tacoma into a southbound 2004 Volkswagen Jetta about 11:55 p.m. October 8, 2016, in Williston.

The jury rejected the insanity claim on each count.

The eight women and four men on the jury also found Bourgoin guilty on two post-crash misdemeanor charges: aggravated operation of a Williston Police cruiser without permission by taking it from the accident site and later reckless driving of the police vehicle by returning to the scene and slamming it into his truck.

The jury, which heard 11 days of testimony, deliberated eight hours on Tuesday and four hours on Wednesday before returning the verdicts.

Later, several family members of the victims expressed thanks to various people: prosecutors, police, the community and media. One requested that the focus now turn from Bourgoin back to the five innocent teens killed in the crash.

Griffin told State’s Attorney Sarah George and her deputy, Susan Hardin, they would have 14 days to respond to any defense motions.

“We think we presented overwhelming medical evidence with regard to the sanity issue. And we are disappointed that the jury found otherwise,” he said.

Katims said the defense plans to appeal on several legal issues, including the court’s refusal to grant a mistrial midway through the trial. The defense had requested the mistrial on grounds the prosecution had failed to supply the defense a statement by Bourgoin’s ex-fiancee, Anila Lawrence.

While Griffin found there was a discovery violation by the prosecution, the judge said he thought it was not serious enough to warrant a mistrial. In the end he ordered the jury to disregard one statement from Lawrence.

For George and Hardin it was the ending they were seeking for a historic homicide case with the most victims in Vermont history.

“I feel fantastic. I am incredibly grateful for such a diligent and thoughtful jury. Really don’t know that we could have asked for a better, more focused jury than we received.  They paid attention the entire time. They really obviously took their time deliberating. I appreciate that they took the time they needed to come to the verdict that they came to,” George said.

George said it was a rewarding experience getting to learn about the victims, whose lives ended too soon, and get to meet their families. She cited the “bravery and their courage to come here every day and listen to this evidence and to have gone through 2.5 years waiting for this day. I could not ask for a better outcome.”

George said she believes the jury focused on the people that had seen Bourgoin just before and after the crash. George downplayed the insanity finding in January by a psychiatrist initially hired by her office in a possible effort to offset the insanity finding by the defense expert.

Griffin said he also would order a presentence investigation by the Vermont Probation and Parole Office.

Before the jury returned, Griffin addressed the packed courtroom and thanked those that had attended the trial for the dignity they had shown the process.

“It is clear to the court this jury has worked very, very hard and has been very diligent in undertaking an extraordinarily difficult case,” he said.

He asked the gallery to accept their verdict with dignity and in peace.

Security was beefed up in the courtroom for the verdict with Sheriff Kevin McLaughlin and six of his deputies, along with five court officers.

Chittenden County Deputy Sheriffs Thomas Oliver and Jared Adams, both in plainclothes, had transported Bourgoin back and forth each day to the Northwest State Correctional Facility in St. Albans. They sat in the first row behind Bourgoin during the trial as part of the courtroom security.

Griffin noted Bourgoin would continue to be held without bail.

Bourgoin faces 20 years to life for each of the second-degree murder convictions.

Judge Griffin began Tuesday explaining to the jury the intricacies of the law, including the requirements for a finding of insanity. Going through 22 pages of legal instructions, Griffin explained all four possible findings, including that Bourgoin could be found guilty of a lesser offense – involuntary manslaughter.

Six hours after the crash Bourgoin still had 10 nanograms of THC – the active ingredient in marijuana – in his system, the official drug report showed. A state judge ordered a blood draw of Bourgoin because of the level of impairment he displayed at the scene.

Any level of THC in a driver in Vermont is against the law.

George, the elected Chittenden County prosecutor, in her closing arguments, said Bourgoin did not have a mental disease or defect needed under Vermont law to establish an insanity defense.

“He deflects blame and is worried about himself,” George said.

Katims noted Dr. David Rosmarin of Boston was hired by the defense and issued his findings after extensive interviews and work. Dr. Reena Kapoor of Yale University was hired by the prosecution and was skeptical of Bourgoin’s story, but after almost 13 hours of interviews she told prosecutors in late January she also believed he was insane.

That left prosecutors scrambling, and they hired Burlington psychiatrist Dr. Paul Cotton on January 31 in an effort to save their case. Cotton testified Friday for the state he did not find any mental disease or defect.

Cotton was grilled for a few hours on Monday – day 11 of testimony – by Katims, who tried to discredit him. Cotton did acknowledge that he had not reviewed or studied the findings by the two doctors or read their depositions in making his determination of sanity.

Cotton, who said he charged $400 an hour for private consulting, also acknowledged at one point that a draft of his recent report had included a finding of an acute stress disorder, but later struck reference to that disease from the final report on Bourgoin.

“He may have had an acute psychotic disorder at the time of the offenses,” Cotton said about the now deleted passage.

Under questioning from George, Cotton said he considered some supporting documents from the UVM Medical Center personnel, including three psychiatrists who saw him briefly in the days after the crash while treating him for life-threatening injuries.

Cotton said he put greater emphasis on his four-hour interview with Bourgoin on December 1, 2016, at the state prison in Springfield.

Katims asked Cotton when he was hired four months ago if he ever sought an updated interview with Bourgoin so a more complete picture would be obtained before giving his final opinion; he said he did not. He was satisfied with his information.

While the state had to prove guilt beyond a reasonable doubt, a defendant only had to show insanity by a preponderance of the evidence. Katims said that meant only one grain of sand above 50 percent.