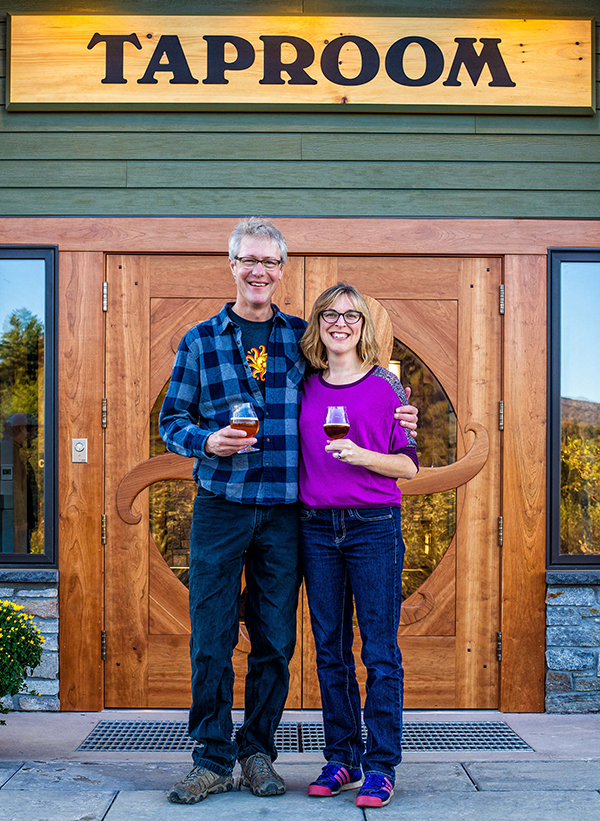 Karen and Sean Lawson of Lawson's Finest Liquids in Waitsfield were celebrated by friends and family and the Mad River Valley Rotary Club when they were named Rotary People of the Year.

The May 15 event took place at the Pitcher Inn with over 80 people in attendance for a dinner prepared by new head chef Jacob Ennis and hosted by manager Lorien Wroten.

The Lawson family was well represented there with their daughters, a niece, and Karen Lawson's parents. Also, several employees of Lawson's were there. Most of the Rotarians wore a Lawson's Finest T-shirt from their retail store.

Some interesting comments came up during the dinner:

Sean first started brewing beer when at UVM when a classmate of his introduced him to the possibility. About 11 years ago, he started brewing in his backyard shed. He first really realized he was onto something big when he heard people were arriving at The Mad Taco at 4 a.m. to get tickets to line up to buy his beer at the farmers’ market. And Jack Garvin convinced him to be the first retail outlet at The Warren Store, and lines soon formed there to buy his beer as soon as it arrived.

Several employees spoke at the dinner about how much they enjoy working there and their support for the Lawsons. Ninety-five percent of the original workforce hired at Lawson's  new facility are still employed there. And it was noted that by paying a livable wage with no tips, their workers are all not pushing to work weekends when tips can be maximum.

Karen Lawson commented that Lawson's taproom and business model is not unique. They traveled all over New England to other breweries to seek out the best ideas for their facility. Both repeatedly indicated that the Valley Rotary Club ideals and positive contributions were exactly what they were trying to emulate.

In their honor and in their name, the Valley Rotary made a $1,000 contribution to the national Rotary Paul Harris Fellow Foundation which supports a variety of education, disease prevention and peace promotion causes throughout the world.