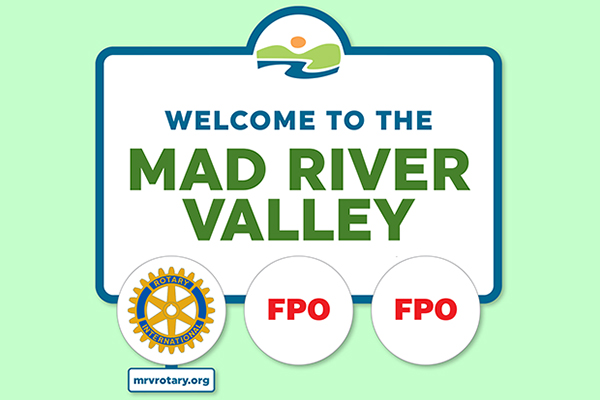 The Valley will receive two new signs welcoming visitors to The Valley, one south of Warren Village near Peter DeFreest’s house and the other north of Waitsfield Village near Waitsfield Telecom.

The signs are sponsored by the Mad River Valley Rotary, the local Odd Fellows and the local Masonic Lodge.

Gordon Hoare, of the Rotary Club, and Joey Daniell, Rotary Club president and marketing resources manager at Cabot Creamery Co-op, came before the Warren Select Board on June 25 with sign designs. The pair said the signs will be made by Mad River Valley sign-maker Sparky Potter of Wood and Wood in Waitsfield. The initial sign designs were done by Gray Cat Studio in Waterbury.

Daniell added that the sign had a slogan underneath it in the initial markups, but it was later taken out as the Rotary felt drivers at high speeds would not be able to read it. The slogan was “Come for the mountains, stay for The Valley.”

The costs associated with this project as well as the yearly upkeep will be covered by the Rotary Club.

The new signs should be installed by Labor Day.

Robert Durfee of DuBois and King was present at the meeting to discuss cost estimates for repairs to the Warren covered bridge.

The initial estimate was $42,476 for the Warren covered bridge project and $4,000 for the update of the Emergency Action Plan for the Blueberry Lake dam.

The town has paid for minor fixes on the covered bridge, including roofing both sides of the bridge, knee braces and some exterior work to the face from truck damages.

Durfee and board members went over the current preliminary design and what was to be replaced on the western abutment. Other bridge repairs include replacing rotting timber bearings, exterior boards and timber strings.

The new preliminary design will be to rehabilitate the structure and the western abutment with reinforced concrete of 6 to 8 inches.

According to town administrator Cindi Jones, who replied via email, “They will change the preliminary design to rehabilitation instead of replacement. The original price tag was $850,000.” Jones added that there isn’t an updated price tag as of yet until the preliminary design is worked for rehabilitation. Jones wrote that the town does have a Transportation Enhancement Grant for $300,000 that was awarded in 2014.

The final plans are that bid docs will go out in January 2020 with finalization of a contractor in February 2020, with project completion in 2020.