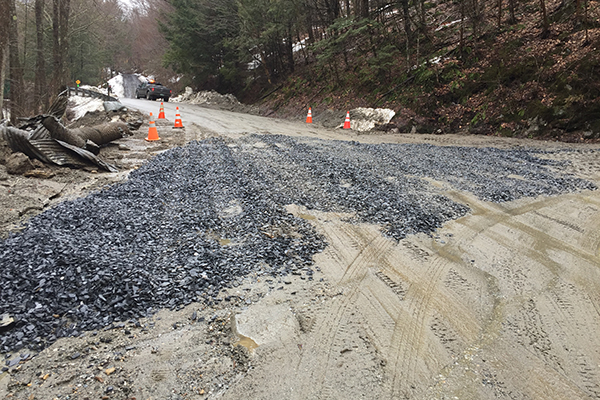 The Dowsville and Ward Hill Connector in Duxbury is now considered a town trail after discussion at a recent select board meeting.

Sam and Kerry Jackson, who live on the Dowsville and Ward Hill Connector, purchased their property in 2005 with the understanding that the road was a Class 4 road. Class 4 roads are maintained minimally by the town highway department. The Jacksons were confused as to why they received regular maintenance until a certain point, when road work stopped.

The Jacksons, upon digging deeper into the story, found that their road had been reclassified as a Class 4A road with no notification from the town and wondered what the reasoning was.

Kerry Jackson initially started asking the select board in September of 2016 about why their road had been changed without notifying the inhabitants. Newer housing developments nearby accessed by the Class 4 portion of Dowsville above their property also had concerns about the impact of additional traffic. The Jacksons said that their road sees the heaviest traffic during hunting season and in the spring when high school students go mudding, further hurting their road.

At the recent meeting, Pratt said that the documents show that site visits and public hearings were conducted by the select board at the time to hear complaints by individuals in 2002. There were also signed signatures of other residents on the road and the town’s lawyer. Kerry Jackson said that when the couple first bought their property, they were told it was a Class 4 road and received minimal maintenance from the prior road foreman.

Board members added that the previous foreman could have done this as a neighborly gesture, as the foreman also helped push back banks on other roads not owned by the town. The town most likely had the individual stop routinely doing so, board members said, having road workers stick to main roads, which is when the Jackson’s noticed town road help stop.

In a new policy, yet to be signed by the select board, it states all other Class 4 roads in Duxbury to include Marshall Road, Ryan Road, which are both classified as Class 4A, Scrabble Hill, Camel's Hump, Richardson Road, Delong, Connolly, Devlin Road and Mill Street, which are all Class 4B roads.

The policy will not go into effect until it has signatures from all members. The Duxbury Class 4 road policy states: “All Class 4 roads will be placed into one of two groups by a committee of two made up of the road foreman and a select board member. Criteria used to group Class 4 roads will be condition, topography, slope and use. The select board will review and approve the groupings. The groups will be as follows: Group A: These roads are determined to be of sufficiently good condition that town equipment will not be damaged if used on these roads. Group B: These roads are determined to be not maintainable by town equipment.”

The policy indicated that residents of Class 4 roads can upgrade their road grouping by writing a letter to the select board to vote and agree that the roads comply with standards from A-76 of the Vermont Department of Highway Standards.