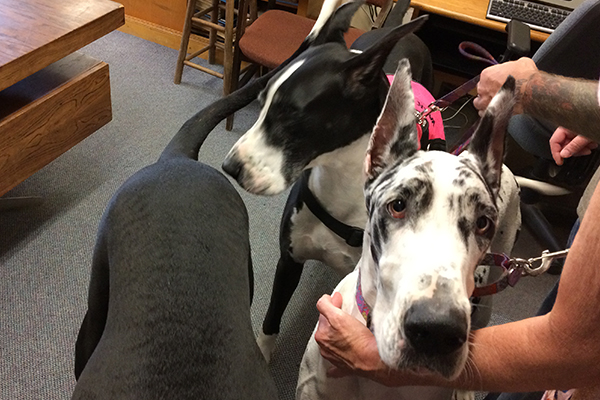 The dog lovers at The Valley Reporter were treated this week to a visit from Mist, the Great Dane who went missing on the Fourth of July. Mist and her two siblings took over the office on Wednesday morning, July 17, causing almost 400 pounds of tail-wagging chaos while greeting Valley Reporter staff dogs and accepting treats.

Many Valley residents and visitors and many, many people from afar followed the story of Mist, the missing 1 ½-year-old harlequin Great Dane who was spooked by fireworks and shooting, and ran off on the night of July 4.

Her human, Josh Sahlman, fell asleep at 11 p.m. at his home on Village Woods Drive in Waitsfield and woke at midnight to find that she’d jumped out a second-story window. Mist and her canine siblings – Freyja, who is 4 ½ years old, and Valkyrie, who is 2 ½ years old –had arrived by transport service earlier that day and were not oriented to the neighborhood and their new surroundings when the fireworks started.

After searching for her that night, he contacted local friends and was put in touch with Waitsfield dog warden Marie Leotta. Sahlman said he was overwhelmed by the support people offered him and their willingness to help him look for her. Posts went up on The Valley Reporter’s Facebook page (which were shared over 400 times and then over 200 more times two days later) and on Front Porch Forum.

Sahlman, Leotta and Jim Darrow, Fayston (with his daughter, Kayla) searched for her every day from early morning to late at night and often well into the next morning.

Two days after she went missing, Leotta got a call from someone who said the missing dog was sitting on her porch. She raced to the house and determined that it was not Mist but Freyja, who had jumped out the living room window, panicked because her human was gone so much while looking for Mist.

With people throughout The Valley keeping an eye out for her (she’s hard to miss!) she was spotted on Airport Road, then North Fayston Road, Waitsfield Common Road, Tremblay Road and, finally, on July 9, she was spotted in the cornfields behind Verd Mont Mobile Home Park around 1 p.m. Salhman drove through the fields and tried to get her to come to him, but she was just zigzagging through the rows of corn and wouldn’t come to him.

“I went back to the parking lot and then she just walked up to me,” he said. In tears and clinging to each other, they returned home where Salhman and his best friends have stayed close to each other ever since.

Salhman is relatively new to The Valley. He is the son of the late Bob Sahlman who died in January. Josh Salhman relocated from Florida to The Valley and then arranged for the dogs to be transported here.

He said that he was overwhelmed by the support he received, noting that the fact that she was missing was announced several times by the band at the farmers’ market on July 6. He said that he went to Round Up on the River in Waitsfield with her on July 10.

“I couldn’t walk more than a few feet without people coming up to me and telling me how glad they were that she was found,” he said.

Sahlman was first exposed to Great Danes through an aunt and uncle when he was a young child. Seven years ago he got his first Great Dane, Fiona. Fiona was killed in a car accident. Freyja came along 4 ½ years ago as a birthday present and Valkyrie joined the pack two years later. Freyja and Valkyrie are mantle Great Danes while Mist is a harlequin. The names refer to their coloring. The mantles have more solid coats while Mist, the harlequin, has a ticked and spotted coat.

All three dogs are certified service dogs, and prior to moving here Salhman regularly took them to nursing homes and care facilities in Florida.

For the record, they eat 310 pounds of food a month.