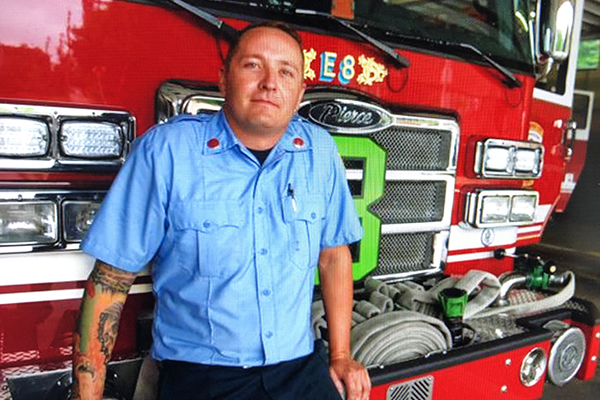 Baltimore firefighter Nick Eid, the son of Michelle and Tom Eid of Warren, has been hailed for his quick thinking and compassion when he came upon an accident while off duty this spring. His actions, according to media reports, gave a 17-year-old boy a second chance at life.

Dylan Brown lost control of his car on Gross Mill Road (Maryland) at about 9:30 a.m. on April 18, and the driver’s side hit a tree. Eid heard the sound of the impact and jumped in his truck driving toward the sound.

He found Brown with his face tilted down and saw that he was taking only one or two breaths a minute. After checking that there was no obvious spinal fracture he repositioned the young man’s neck and he began breathing normally.

With no cellphone service, Eid ran up the road looking for one bar of service. He found one and called 911. When he returned to the crashed car he noticed that the engine was on fire and he ran back to his truck for his fire extinguisher. He got the fire out and stayed with Brown until EMS cut him out of the car and took him to the hospital where he was treated for serious injuries, including brain swelling and bleeding, a blocked carotid artery and a partially blocked carotid artery, heart valve damage, lung damage, liver damage, a broken kneecap, elbow and shin.

Brown is recovering and was able to meet Eid on June 17. Brown and his family credit Eid for saving his life and changing it as well.

Eid began fighting fires in Warren when he was 16 years old. He grew up watching his father serve as a volunteer firefighter with the Warren Fire Department.

He attended the University of Maryland, College Park, graduating as a fire protection engineering major. He accepted a job with the Baltimore City Fire Department in 2007 and is currently a pump operator at Engine Company 8.