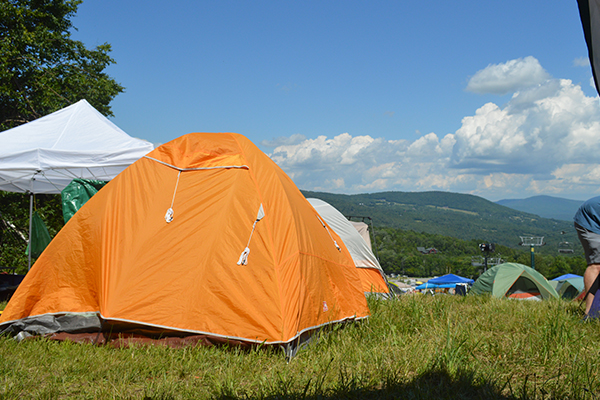 The parcel in Warren that was discussed last week is on Route 100 and is surrounded by the Green Mountain National Forest where camping is allowed. The parcel that Warren owns and considers a picnic or rest area is not appropriate for camping because it is less than 1 acre in size and the stream and road setbacks are not met.

Local officials were queried on whether camping is allowed in town forests and public land, and whether camping is allowed on private land. They were then asked whether the town’s zoning ordinance allows the development of campgrounds on private land and, if so, under what circumstances. With the Bear North Festival getting underway tomorrow, August 2, at Mount Ellen and featuring car and slope-side camping, town officials reported that camping can be permitted – on a case-by-case basis – as part of a festival permit. That occurred in Waitsfield with the Tweed River Music Festival and in Fayston with the Frendly Gathering and this year with Bear North.

In terms of whether camping is allowed on town-owned land and private property, the answers varied.

In Fayston the management plan for Chase Brook clearly states that no camping is allowed, according to town administrator Patti Lewis. It is unlawful in Fayston to park a camper, temporary shelter or tent anywhere, except in an approved campground or on a residential lot as long as the camper is not hooked up to water and wastewater and is not occupied more than 90 days a year.

Warren’s zoning regulations are similar to Fayston’s when it comes to campers and temporary shelters on private land, but, according to zoning administrator Ruth Robbins, the number of days is limited to 30 rather than 90 for campers and tents on land with or without an existing house. She said the regulations don’t speak to camping on town-owned land such as the Eaton Forest behind Warren Elementary School or the land behind the Sugarbush snowmaking pond.

“As we discussed during the last select board meeting, the board doesn’t want responsibility for people camping on town property, whether it’s a small camper in the town right of way or a tent or an RV. We don’t have an actual town ordinance for that just yet,” Robbins said.

Duxbury and Moretown share a zoning administrator, David Specht, and similar regulations when it comes to camping. Specht said that both towns have public land and said, “At this time neither town has any written guidelines concerning camping.”

“From a zoning point of view regulations exist in both places for camping on private land, even if it’s just pitching a tent on someone’s land,” Specht said. Those regulations are similar to other towns in that they spell out a limited time period and no hookups for water/septic.

Waitsfield’s regulations specifically prohibit camping on town-owned parcels such as Wu Ledges or the Scrag Municipal Forest, according to town administrator Trevor Lashua. Camping on private land is allowed under specific time-limited criteria with no hookups for water/septic. He said that pre-existing, permitted camps, such as the primitive Boy Scout camp on Scrag Mountain, are a permitted use. 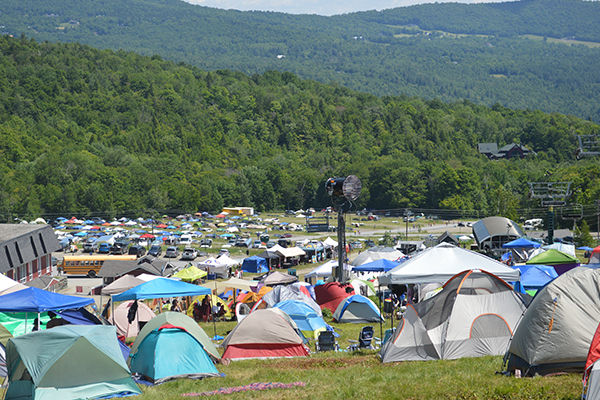 When it comes to the development of public campgrounds on private lands, the zoning ordinances are relatively similar from town to town. In all towns development of a campground requires a conditional use permit from the town development review board (DRB) and the proposed site must have specific stream and road setback requirements.

Fayston’s zoning requires campgrounds to be at least 5 acres and have at least 20 percent of that total campground area set aside for conservation and recreation. Campgrounds must have adequate lavatory, shower and toilet facilities. Water and wastewater systems must meet state and local regulations. Each campsite must have at least 1,000 square feet.

For primitive campgrounds, the DRB can waive many of those requirements if lot size, campsite area and setback distances are met.

Campgrounds are allowed in Warren under similar conditions, including 5 acres with 20 percent of the land open and setbacks met. Warren’s regulations call for adequate lavatory, shower and toilet facilities and state and locally approved water and wastewater. Warren’s regs call for 2,000 square feet per campsite. These regulations allow the DRB to waive certain conditions for primitive camping.

Chris Damiani, Waitsfield’s zoning administrator, said that developing a campground on private property is possible in the town if it is proposed for an area of the town identified for recreation.

“If someone were to apply for a private campground in the ag/res district, ultimately, my decision would be not to allow it and the applicant would have to appeal to the DRB because it’s not included in any allowed uses in that district,” Damiani said.

Specht said that commercial recreation is allowed in both Moretown and Duxbury, so campgrounds can be created. As with the other towns, there are setback, open space, health and safety and regulatory requirements that must be met and campgrounds must be approved by the DRB.