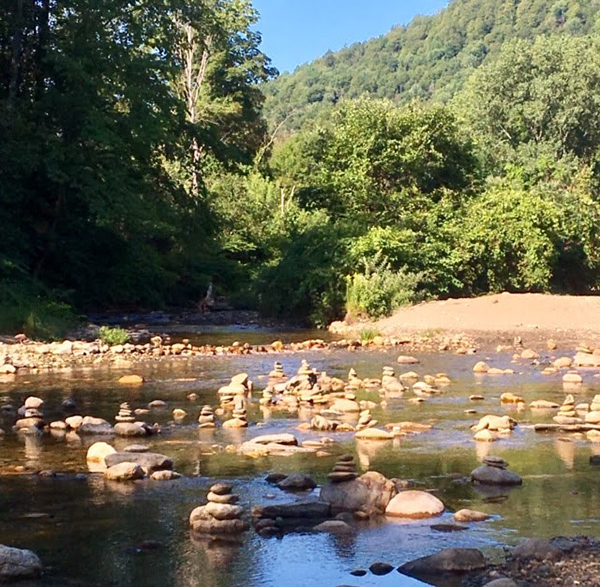 Sampling results from the fifth round of Friends of the Mad River’s 2019 Mad River Watch water quality monitoring show one site with unfavorable E. coli levels as of Monday morning, August 5. E. coli levels far exceeded the standard in Freeman Brook in Warren Village with 547.5 colonies of E. coli per 100 mL water. Given that it did not rain 24 hours prior to Monday morning’s sampling to wash pollutants from the land into the water, this level in Warren Village may be particularly concerning. While it could be due to a sampling or processing error or to a short-term water quality problem, Friends of the Mad River (FMR) is investigating possible “point-source” problems. FMR Monday sampling this summer has not yet fallen on mornings after rain and, therefore, has not yet captured data that would show pollutant loading from “nonpoint source” stormwater runoff.

Thanks to cooled air temperatures, Mad River water temperatures have decreased quite a bit since FMR’s sampling on July 22, ranging from 57F in the headwaters (down from 64F) to 67F (down from 71F) along the Moretown Main Stem, with a high of 71F at Blueberry Lake (down from 77F). Lower air temperatures didn’t stop people from taking to their favorite swim hole over the weekend.

At the time of sampling on Monday morning, the river's discharge (volume per second) was 47 cubic feet per second (cfs) at the U.S. Geological Service flow gage in Moretown (the lowest yet this summer), having dropped from a crest of 202 cfs after scattered thunderstorms last Wednesday, July 31. The flow condition of the Mad River at the time of sampling Monday morning was low and steady (LS). The mean flow for this date over the last 90 years is 147 cfs; the water is lower than usual at this time of year.

When it next storms, the rain will wash the pollutants into the water and can cause E. coli levels to fluctuate, even on a daily basis, as water carrying pathogens moves down the watershed. FMR’s E. coli sampling results are only a snapshot in time intended to give people a sense of the conditions that lead to high pathogen levels in the water so they can be informed. People are advised to use common sense and don't swim for several days after a rain. It is estimated that at the level of 235 colonies of E. coli per 100 mL water, approximately eight out of every 1,000 swimmers are likely to contract a waterborne illness related to fecal contamination.

As part of the Mad River Watch program, community volunteers collect samples of water on six occasions throughout the summer from about three dozen river and tributary sites. Then, FMRs’ lab and Vermont’s Agriculture and Environmental Laboratory (VAEL) analyze the samples’ bacteria and nutrient levels. Friends posts E. coli data in The Valley Reporter, on its Facebook page and websites, and on signs at 10 popular swim holes across The Valley so that people have information to make their own recreational health decisions. In addition to E. coli data, Friends posts total phosphorus and nitrogen data on its website at summer’s end when received back from the state lab. Over the decades, Friends of the Mad River has used Mad River Watch data to guide many successful cleanup efforts. 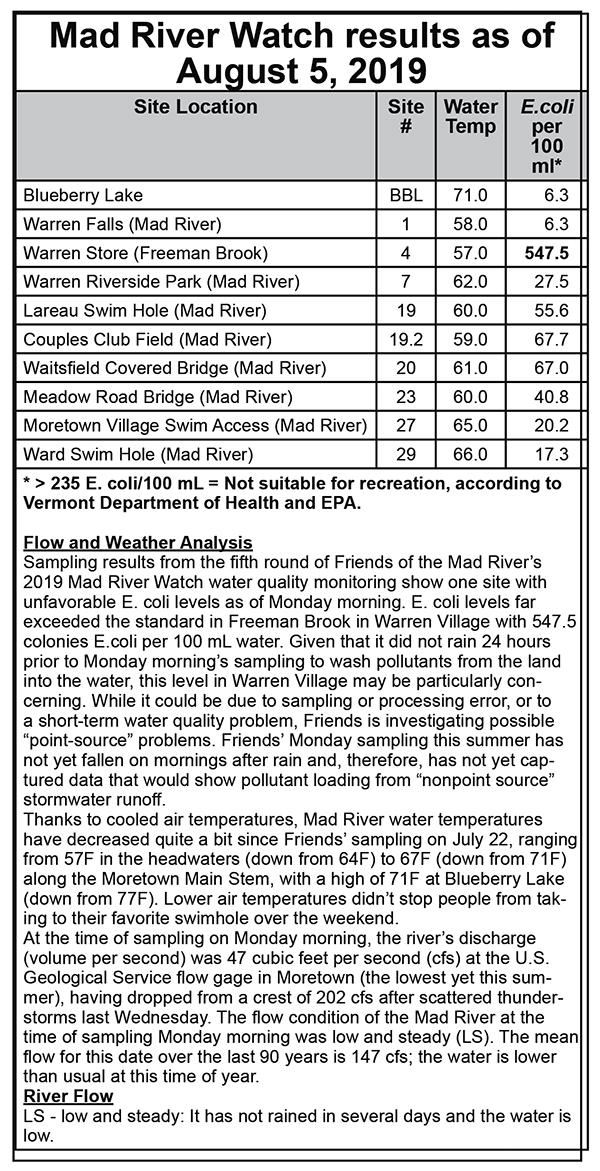