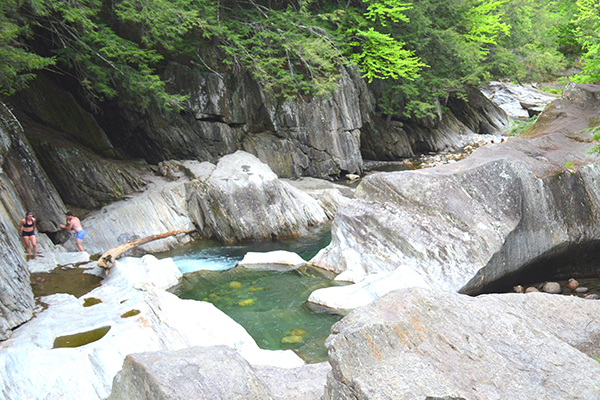 The Warren Select Board continues to work on the issue of parking at Warren Falls and at its August 13 meeting the board heard a report from town constable Gene Bifano on how to improve the situation.

Warren Falls parking has been an issue for years as locals and visitors are drawn to the swimming hole, which is part of the Green Mountain National Forest. Warren has struggled to enforce parking regulations that prohibit parking in the travel lanes on Route 100 south of Warren Village. A safety concern is people walking and running in the travel lane with children, and people parking on the road despite signage.

This has been an ongoing discussion between town law enforcement officials and the select board this summer on whether ticketing or towing could improve the situation.

According to town constable Jeff Campbell, the sheriffs and the town constables are not allowed to issue tickets on Route 100 because it is a state road rather than town, but they are allowed to tow vehicles.

Bifano was present at the Warren Select Board meeting August 13, where he offered information on ticketing and towing practices. Select board members are wary about handing out tickets to visitors and about towing vehicles. The spot is almost always overpopulated, leaving the parking lot and both sides of the road packed with cars. There have been incidents where drivers park on neighboring homes’ and businesses’ land.

Select board members indicated that they can’t sit on their hands any longer and need to come up with a safe solution. The main concerns are safety in the area and the environmental impact of such heavy use on Warren Falls.

Bifano added that the Vermont State Police do not have time to give tickets and monitor that area daily in the summer. A solution he came up with was handing out tickets, but he said that on a state road a sheriff cannot issue a parking ticket unless they know the individual. Bifano indicated he would look further into that. Bifano reached out to the Vermont League of Cities and Towns further about issuing parking tickets and found sheriffs can issue them to drivers on town roads.

Bifano said if the sheriff issues a ticket on a town road the town gets the fine money except $12.50 that goes toward the judiciary bureau. Bifano brought up towing cars and said he wished the tow-away signs for the state were bigger for drivers to see. One problem with towing cars is that the cars are parked too tightly together so a tow truck could not hook up to it.

Campbell offered the idea of having the area that has No Parking signs and the sides of the road striped to indicate there is no parking allowed and that it is a tow-away zone. Town administrator Cindi Jones will reach out to VTrans about striping in the conflicted area as it is a state road.

The board took no action at its meeting this week and will continue working on the issue.