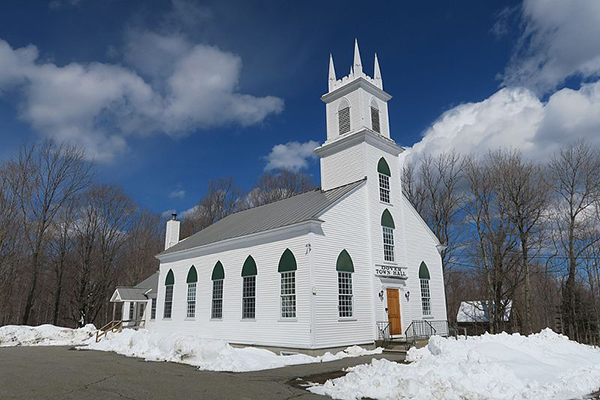 Dover is in southern Vermont near Mount Snow.

The local option tax was proposed by the Dover Select Board and local businesses. When the LOT was proposed, its purpose was specifically for economic development and vitality and not to reduce local property taxes or pave roads.

The original proponents identified six areas for spending the funds: beautification, events, marketing, telecommunications, trails and recreation venues. After the LOT was passed, there were some projects proposed in those areas, but there was not a lot of organization, explained Steve Neratko, Dover’s economic development director.

Dover provides grants for projects that fall within the target areas. Neratko has been on the scene for two years and he added four new categories for spending: business and workforce development, housing (with nearby Wilmington as part of a bi-town committee), infrastructure and public safety.

Neratko helped the town create a committee of community members and one select board member for each of the spending areas. Those committees work to identify and vet projects which the select board approves.

Some successes of the LOT and its projects include the creation of a Blueberry Festival that started small and has now become a 10-day event that attracts tourists and includes a parade. The festival received seed funds from the Dover LOT but is now self-sufficient in terms of funding and the Dover LOT pays for the parade.

“We’ve had some concerts at Mount Snow, a Wine and Harvest Festival put on by Mount Snow and the chamber. The majority of our events are successful and are repeated each year,” Neratko said.

The grants that come from the Dover LOT for events are generally between $5,000 and $10,000. There are some that are larger. For example, the issue of high-speed internet access and cellphone coverage was identified as a real problem in terms of economic development.

“We have a lot of second-home owners who can’t stay an extra day or two to work from home because they don’t have access to high-speed internet. We want them to stay longer and participate in our economy and also hope that some folks will decide to relocate here and telecommute,” Neratko said.

To that end, Dover negotiated with providers and spent funds to bring new cell towers to the area and is currently putting the final touches on a plan to bring high-speed internet to every household in the area. Those projects cost in excess of $1 million for the first phase.

The town has used LOT funds for a variety of marketing incentives including a program for co-advertising that provides reimbursement of 40 to 50 percent of the cost of print, radio or internet advertising as long as business owners feature the Dover logo. Businesses can be reimbursed up to $2,400 a year.

Working with Wilmington on the issue of housing through the bi-town economic development committee, a contractor has been hired to complete a housing study that is similar to the housing study being developed locally for the Mad River Valley Planning District.

“They’ll look at our issues and inventory and develop incentives to mitigate the problems. Housing is our biggest issue related to economic development in our two communities. Because of second-home owners and Airbnb we see tremendous pressure on our housing stock. Workforce housing is especially difficult. We’re hoping we can provide incentives for private developers to partner with us to develop housing,” Neratko said.

The trails committee created a 25-year master plan for trails and recreation that will join the town’s hiking, biking and ski trails.

“At the last select board meeting, the board agreed to purchase 50 acres off Route 100 in downtown West Dover that will be able to connect the trail system and provide potential venues for additional events as well. We’ll be able to connect our trail system in the more rugged trail areas to the downtown area and will also connect a lot of residential areas to our downtowns so people can bike, hike and ski into town,” Neratko said.

Dover LOT funds are used for beautification projects like purchasing flower barrels for the town during the summer, along with banners and holiday decorations. The town is working on a municipal water project, a piece of infrastructure that might receive LOT funding.

Dover is incentivizing business owners to expand with LOT grants plus grants for new signage. The public safety group is working to make sure the local fire and EMS services have the equipment they need.

Neratko is currently developing metrics to assess the efficacy of previous spending as well as monitoring annual revenues from the LOT. Neratko is paid from LOT funds.