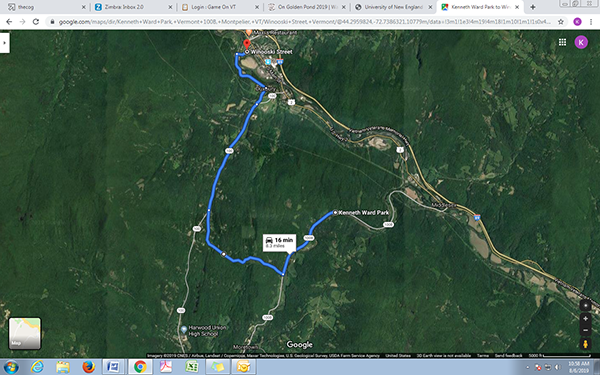 Moretown residents aired questions and concerns about the Route 100B bridge replacement at a VTrans presentation at the Moretown Town Hall.

The August 5 presentation was part of a Moretown Select Board meeting. There were roughly 20 residents in attendance, and people wanted to know what to expect. Moretown residents wanted to know about traffic control, detours, speeding, future flood durability, costs and what cosmetic differences there will be.

Barrows said that the original bridge was constructed in 1928, and it is currently structurally deficient. Barrows added that the bridge rating is fair but has a less than desirable roadway length. Deficiencies with the bridge include substandard land and shoulder widths. Currently the lane is 10 feet with no shoulders, and the new lanes will be 11 feet with 4 feet of shoulder for bikers and runners.

The bridge as it stands has heavy spalling in curbs and is losing connection with the ledge/bedrock it’s on. The newly proposed structure will have a concrete deck on steel girders, spread footings on ledge, and will be longer, with an increased width and safer alignment. The bridge has been one way with a traffic light at each end for two years due to its deteriorating condition. The overall goal includes completing construction in 60 days to avoid school bus detours.

The project schedule includes being advertised in October 2019 and to begin construction activities in April or May of 2020. The bridge, if all goes well, will be closed June 22 to August 21, 2020, and completed in September 2020. The lifespan of the new bridge is projected to be 75 years.

Another resident asked if the new bridge design will affect the flow of the river. The VTrans people explained that the bridge will be wider and higher. The engineering calls for giving the bridge more room in case of high water and to minimize as much erosion as possible. Presenters did not have a solid cost number for the project but estimated around $2 million.

As far as detour routes, the presentation showed alternate routes for this project as well as where signs would be placed to notify drivers. Moretown residents wanted to know if there would be law enforcement officers present to enforce speeding and safety because this has been an issue in the past. One resident who bikes on Pony Farm Road said that speeding and traffic are already out of hand.

The Moretown Select Board is concerned about wear and tear to its two dirt roads that will likely see heavy increases in use by drivers who will not take the official VTrans detour on Route 2. Pony Farm Road at the south end of the village will connect drivers to the south and Stevens Brook Road north of Moretown will connect drivers to Route 100. Stevens Brook Road is partially in Moretown and partially in Duxbury.

Moretown has received a grant from the state to help maintain those two dirt roads during the bridge closure. The amount has not yet been determined.

Moretown will see a series of cosmetic changes in addition to the bridge work. Moretown’s village sidewalk project is out for bid. It had been put on hold over concerns about catch basins on some of the village properties. Once a bid has been accepted, a start date will be set. When that project is completed, the state will repave Route 100B through the village.

This informative meeting was not the last. As the project comes closer, VTrans will present and hear community dialogue again. Closer to the project start date, the contractor hired will meet with all emergency services so they can plan a route to certain residences around detours before the actual bridge closure.