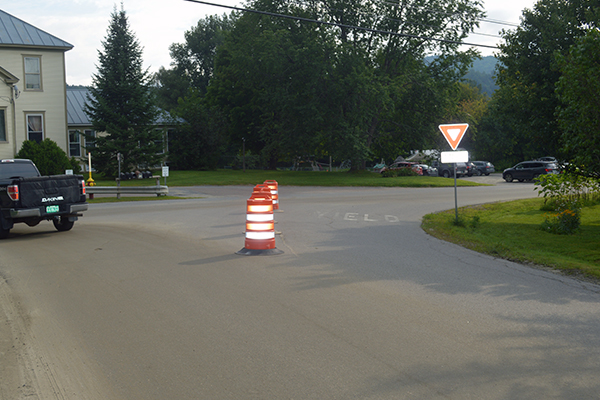 Community concerns around a busy Main Street intersection in Duxbury prompted the highway crew to put up large traffic cones this week in hopes of encouraging drivers to yield properly.

At the Duxbury Select Board meeting on August 12, highway road foreman Kyle Guyette drew his ideas for making the intersection of River Road and Main Street safer on a chalkboard.

Guyette drew a line of cones that angled in line with the curve of the corner on Main Street, to prompt drivers to veer right around the cones before completing a left turn onto River Road at the yield sign. (See photo.)

Prior to this meeting, the select board discussed installing cones that would be drilled into the pavement and taken out seasonally.

The cones were put in place the following morning as a trial run to see if the placement would prompt drivers to yield correctly. Guyette has been in contact with L & D Safety Marking Corporation out of Berlin who will be striping pavement near the intersection. The plan is to have Waterbury side-sweep the street before striping and then for L & D to paint a yield ahead and yield markings.

Residents from Scrabble Hill were present to hear from DuBois & King about the results of the land survey of the area. The presentation also went over water tables and the way that water runoff affects ditching/road segments in the area.

A sub-consultant for Dubois and King did a geotechnical evaluation. On one side of Scrabble Hill Road the team looked at hydrology and hydraulics reports. Coming off the hill, the water runs into a ditch and then into the road itself and then down a steep slope on the other side.

Darren Benoit of DuBois & King noted that the soil around the project, known as glacial till, is incredibly dense material that is good for packing and holding together. The problem with the location is a heavy storm with lots of water will make the road substance fall off the slope on the side that is not ditchable.

“It’s at the failure condition. Any tipping of it, the perennial straw that breaks the camel’s back, that’s how this slope exists now. On the high side you have a ditch, but the challenge is you come out and dig the ditch and in the steeper sections it fills right back in. It’s very hard to hold the slope. The challenge we have right now is the geotech is looking at what he can do with the soil; we’re looking at what this ditch might be,” said Benoit.

Benoit said the problem lies where the ditch on one side fails and water attacks the roadway and the culverts from the downstream end. It’s not a culvert-size problem with the culverts on the road; it’s an undersized ditch.

One resident asked if there was a danger of a flash flood taking out the road entirely. Benoit added that the road had the best soil possible for holding the bank. Benoit said if they couldn’t cure the stormwater, it could be the ignition for an event such as that.

Severe flooding and washout damage in April and May in Duxbury caused road closures on Camel’s Hump and Scrabble Hill Roads. From those storms, the town installed steel plates and new culverts on Scrabble Hill and ditched along the road. The cost from the damages will be reimbursed through FEMA for emergency fixes.