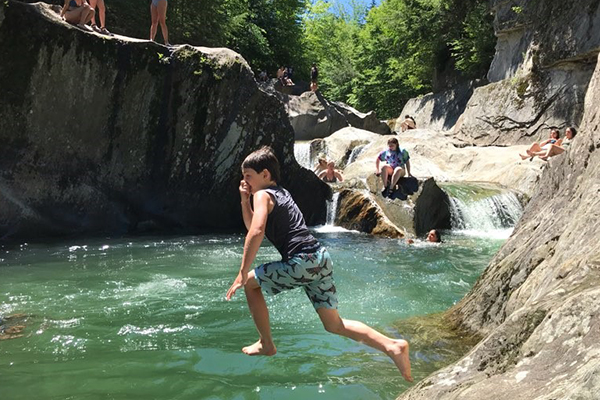 Sampling results from the sixth and final round of Friends of the Mad River’s 2019 Mad River Watch water quality monitoring show no sites with unfavorable E. coli levels as of Monday morning, August 19. Rain overnight Saturday, August 17, caused the river to crest at 5:30 Sunday morning and wash pollutants from the land into the water and downstream prior to sampling Monday morning.

On August 5, E. coli levels far exceeded the standard in Freeman Brook in Warren Village but had resolved this week. Friends of the Mad River investigated this and wasn’t able to pinpoint a pollutant source. In the past, however, this high level of bacteria during dry weather was often attributed to unmaintained septic systems. Homeowners can learn more septic maintenance that keeps the river swimmable at www.epa.gov/septic. Not cleaning up after pets near the stream can also cause high bacteria levels or it could be due to a sampling or processing error.

Mad River water temperatures have increased slightly since Friends of the Mad River’s (FMR) sampling on August 5, ranging from 60F in the headwaters to 71F along the Moretown main stem, with a high of 75F at Blueberry Lake. At the time of sampling on Monday morning, the river's discharge (volume per second) was 84.6 cubic feet per second (cfs) at the U.S. Geological Service flow gage in Moretown, having dropped from a crest of 187 cfs after Saturday night rain. The flow condition of the Mad River at the time of sampling Monday morning was low and declining (LD). The mean flow for this date over the last 90 years is 85 cfs; the water level is usual for this time of year.

Churned-up and turbid water didn’t seem to stop people from taking to their favorite swim hole on Sunday, August 18. When it next storms, the rain will wash the pollutants into the water and can cause E. coli levels to fluctuate, even on a daily basis, as water carrying pathogens moves down the watershed. FMR’s E. coli sampling results are only a snapshot in time intended to give people a sense of the conditions that lead to high pathogen levels in the water so they can be informed, explained Corrie Miller, executive director of Friends of the Mad River.

“You are your best protector – use common sense and don't swim for several days after a rain. It is estimated that at the level of 235 colonies E. coli per 100 mL water, approximately eight out of every 1,000 swimmers are likely to contract a waterborne illness related to fecal contamination,” Miller said.

“This summer’s great swimming has been made possible by the priceless natural resources our Valley offers residents and visitors,” said Miller. “But I hope everyone recognizes all the people and resources it takes to keep the landscape healthy and scenic for the community to enjoy. Thank you to the Mad River Watch volunteers and coordinator for all they do, to the landowners who give us access to important sampling spots, to those near and far who decide to support Friends of the Mad River as donors and to community members who care and work to thoughtfully steward their land. It doesn’t happen without effort, and it takes us all.”

As part of the Mad River Watch program, community volunteers collect samples of water on six occasions throughout the summer from about three dozen river and tributary sites. Then, FMR’s lab and Vermont’s Agriculture and Environmental Laboratory (VAEL) analyze the samples’ bacteria and nutrient levels. FMR posts E. coli data in The Valley Reporter, on its Facebook page and website, and on signs at 10 popular swim holes across The Valley so that people have information to make their own recreational health decisions. In addition to E. coli data, FMR posts total phosphorus and nitrogen data on its website at summer’s end when received back from the state lab. Over the decades, FMR has used Mad River Watch data to guide many successful cleanup efforts. 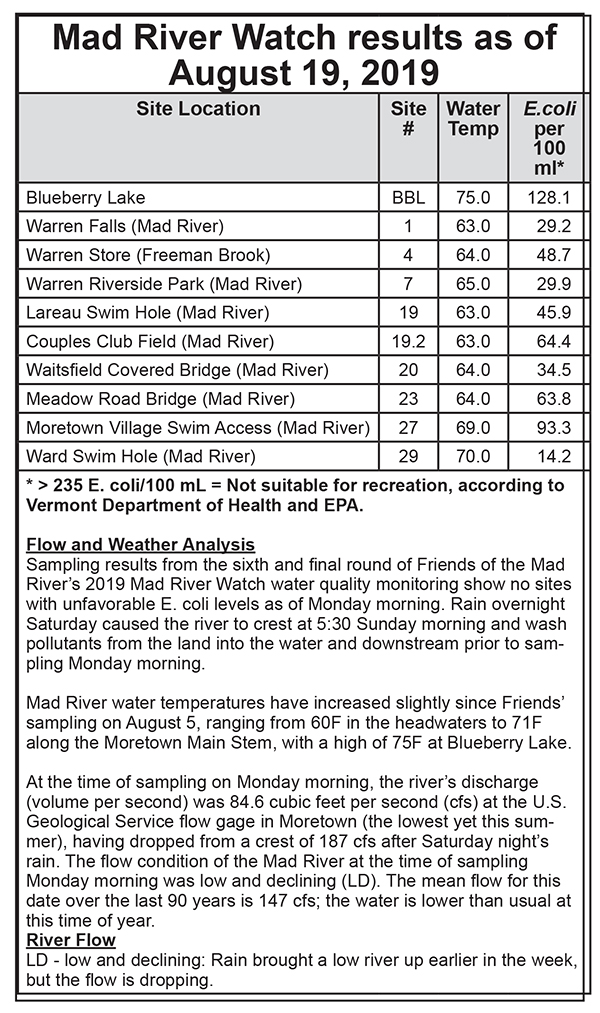