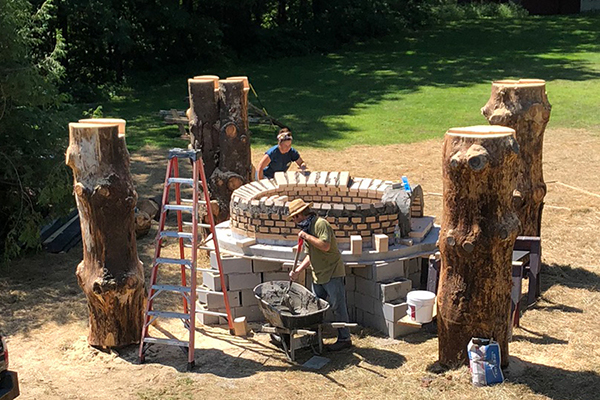 The turtle-shaped outdoor bread oven that will be a centerpiece of the September 7 Great Vermont Bread Festival at Camp Meade in Middlesex is under construction and plans for bakers, vendors, educators and bread toppings continue to develop.

The September 7 event will feature some of Vermont’s best known bread makers, as well as bread samples, kids events, workshops, music, demos, beer, hands-on learning and more. The event starts with a French toast breakfast at 8 a.m. and runs through 6 p.m.

Planetary Matters spokesperson Russ Bennett said that the oven is well underway and that visiting bakers would be preparing their loaves under a tent and baking them in the oven at Camp Meade. The bread will be shared with those in attendance and will be consumed with a variety of toppings including Ploughgate Creamery butter, charcuterie from Babette’s Table, artisanal peanut butter and jelly and more.

The Great Vermont Bread Festival will feature some of Vermont’s best known bread makers who will be demonstrating their skills and also informing and regaling those present with their stories and experiences. There will be a bookstore hosted by Bridgeside Books, panels of farmers who grow the grains and millers and bakers.

Featured bakers include Jeffrey Hamelman, a luminary in the bread world and longtime Vermonter. He wrote one of the most well-respected books on bread baking, previously owned a bakery in Brattleboro, was the baking education director at King Arthur from 1999-2017, and still teaches baking around the world. Others include Waitsfield baker Suzanne Slomin of Green Rabbit Bakery, Charlie Emmers of Patchwork Bakery, Becca Reiger, a teaching assistant at King Arthur Flour, Jim Williams who mills all his own flour, Scott Medellin from Slowfire Bakery, and August First Bakery, who will send a team of people.

There will be activities like roll making for kids, competitions to see who can roll out a baguette the fastest, who can make the smallest croissant, etc. There will also be demonstrations and discussions by cookbook author Andrea Chesman. She will talk about preserving food from the garden and discuss the pros and cons of canning versus freezing. Chesman will also have popcorn made with duck fat on hand and will talk about using animal fats in cooking and baking as part of nose-to-tail eating.

At night, music and beer, sponsored by Peterson Quality Malt, featuring beers made by three to four local brewers using barley grown and malted here in the Green Mountain State will be offered. Other events and speakers are still being lined up. Details will soon be available at www.thegreatvermontbreadfestival.com as well as on the Camp Meade Facebook page.