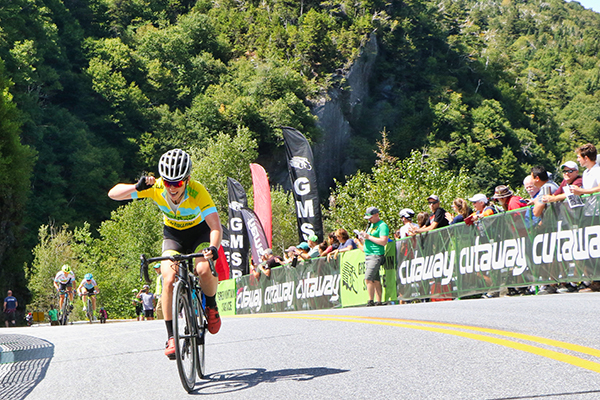 If you place an order for four consecutive days of ideal weather at the Vermont meteorology store, consider yourself mighty lucky if the guy on the other side of the counter produces three. So when Monday, the final day of four days of racing in the Green Mountain Stage Race, dawned chilly and moist (euphemistically speaking), it was to be expected. After all, riders in the first three stages of the race had already been treated to about as much of the good stuff as Vermont ever delivers.

Not only was the individual time trial on Friday blessed by sunny skies and rider-friendly temperatures, the more than 500 riders entered in the race were gifted with a weather bonus treasured by every cyclist: a stiff tailwind. The result, in the elite men’s Pro-Category 1 field and in the women’s Pro 1/2/3 Category field, was utter obliteration of previous course records.

Will Cooper dispatched with the 5.7-mile ride up the hills of Brook Road and onto East Warren Road in a winning time of 12 minutes, 54 seconds, almost 20 seconds faster than the previous record. His average speed of 26.5 miles per hour, however wind-aided, defied the normal limits of human ability given the hilliness of the terrain. Emma Langley followed suit with a time of 15:03, paring a full 12 seconds off the women’s record. In the postrace chitchat among riders, a big topic of conversation was undergearing; if only they had had bigger chain rings to maximize the high, wind-blown speeds they were generating. 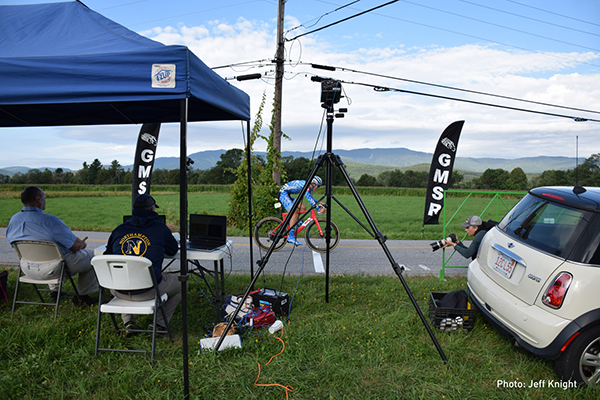 For Saturday’s circuit race, riders were pampered with perhaps the smoothest 37 miles of continuous pavement in the state of Vermont and possibly all of New England – a loop, starting in Randolph, formed by Routes 12 and 12A. Not a hint of a crack, frost heave, pothole or speed bump to be found. Of the nine fields racing, some did one lap and some two, while the two top men’s fields, Pro-Category 1 and Category 2, logged three laps for a total distance of 111 miles.

Now a ride of a century and change might seem a long enough ordeal to cause considerable attrition among riders losing gusto with the increasing mileage. Not this crowd of speedballers. Of the 102 riders in the Pro-1 field, 67 joined forces to blast around the course in the same, hotfooted time of 4 hours, 1 minute as the winner, Steven Cuesta Zamora of Colombia. The average speed was 27.6 miles per hour. Smooth pavement might have helped, but, truth be told, it was simply a matter of these guys being ridiculously fit and fast. (Consider this: A star rider like Nate Brown, who a few years ago wore the King of the Mountains jersey in the Tour de France, could find himself in only 38th place overall before dropping out after Stage 3. That’s a good indication of how strong and deep the field was.) It was a bit of a different story in the Cat 2 race, where five riders, led by Zev Myerowitz, managed to put eight minutes between themselves and the chasing horde.

In the women’s race, Laura Jorgensen edged out Marie-Soleil Blais in a field sprint, in which all but four riders in the field came to the finish in the same time. That meant that Friday’s winner, Langley, would go into Sunday’s queen stage, with the harsh grind up the Middlebury Gap and the unforgiving finish at the top of the Appalachian Gap, still wearing the leader’s yellow jersey.

She certainly defended it well. Despite attacks by four strong Canadian riders, led by Queen of the Mountain leader Lex Albrecht and Blais, Langley hung on up the final, brutal pitch to the top of the gap. After 65 miles of hilly racing, it was Langley over Albrecht by a scant seven seconds.

Meanwhile, the elite men were presented with an extra dose of agony on Sunday’s ride in addition to the two gap climbs that riders in all the other categories had to tackle. The Pro-1 and Category 2 men were required, not long after the start at Sugarbush’s Mt. Ellen, to pedal up the steep, dirt incline of northbound West Hill Road in Warren, part of an extra 16-mile loop before rejoining the main race course. One rider, in his Sisyphean struggle up the climb, was heard scolding race director Gary Kessler, who was on the roadside taking pictures, for having the nerve to inflict such punishment on the peloton.

However grueling the West Hill climb might have been, Vermonter Brendan Rhim stayed within himself and stuck to a smart game plan. Presumably familiar with how to pace himself on Vermont’s dirt road climbs, he allowed others in the peloton to sort out the West Hill pecking order; he knew he needed plenty of gas in the tank to take on the additional cruelty that lay ahead. By the time the race had reached the top of the Middlebury Gap, Rhim was the leader of the pack, as he was at the finish at the top of the App Gap. He measured his effort carefully and wisely to finish 36 seconds ahead of second-place rider Jeremy Rae. The sun shone brightly, fans chalked welcoming messages on the pavement, grimacing riders reached for the depths of their energy reserves to complete the final 20-percent grade, and, all in all, the scene at the top of the App Gap had all the elegant beauty and competitive drama of a great athletic event. 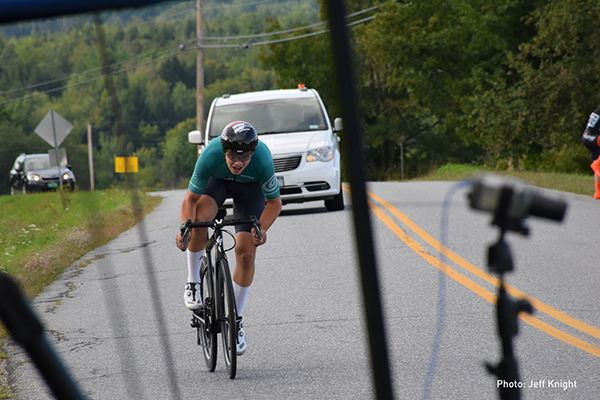 The next morning, the good weather that shone on the first three days vacated the premises. A chilly rain fell in spurts – sometimes hard, sometimes soft – as riders made laps around the approximately 1-mile criterium race circuit in downtown Burlington. Actually, many riders made no laps at all. Nonplussed by the weather misery, they were missing in action. One-quarter of the Pro-1 finishers on Sunday pulled the plug for Monday’s criterium, with approximately the same no-show rate for the elite women.

One of the women who chose to pedal through the rain was Blais, infuriated by her close-but-no-cigar finishes on the three previous days. She was mad at herself, having stood on the podium in all of the first three stages but never reaching the top step. So fueling her Monday jets with residual anger, she blew away from the field, winning in a solo breakaway by 40 seconds and easily overtaking Langley for the final overall win.

On the men’s side, Ben Wolfe, who, at about 6 feet 2inches and 165 pounds, is a behemoth by cycling standards, tapped into the considerable power stored within his large frame to nip Canadian Travis Samuel for the win. Seven seconds behind was Wolfe’s teammate Rhim, Norwich native and Killington Mountain School graduate, who secured the right to head homeward with the yellow jersey awarded to the race’s overall winner tucked under his arm.

The number of GMSR riders with local connections has dwindled over the years, but still carrying the 2019 banner for The Valley were Marc Hammond in the Category 4/5 Masters field and Willem Jewett in the 50-and-older field. Hammond finished 30th overall in his field and Jewett 14th in his. Neither performance had Tour de France team managers scrambling to offer Hammond or Jewett a pro contract, but both guys did what 123 entrants who started the race Friday didn’t do – they hung on all the way until the finish. There is something to be said for staying the course.

The 19th edition of the GMSR is now in the books. Maybe next year, for the race’s 20th anniversary, the guys in the weather store will deliver a beautiful birthday present: four perfect days of sunshine and tailwinds. Riders and race organizers can only dream. 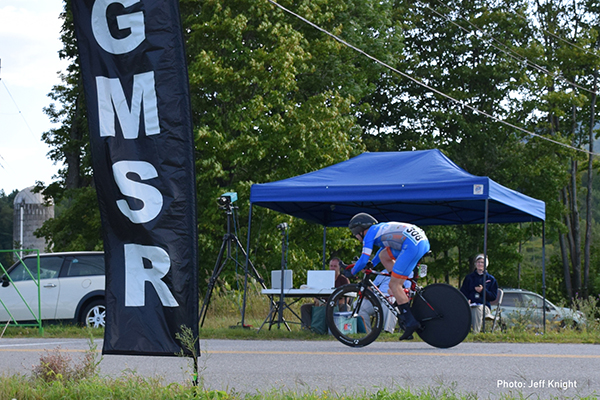