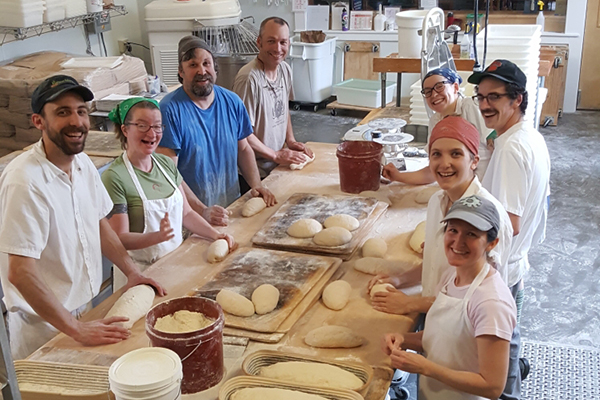 It was really chance that brought Red Hen Baking Co. founders and owners Randy George and Liza Cain to The Valley.

“I got here on January 28, Liza’s birthday. I’d bought a really good bread oven and had a $12,000 balloon note on it that was due in six months. I had a business plan and needed to get a loan and figure out where to put the oven,” George said.

Seeking a seasonal job, he began calling maple sugar makers, getting a positive response from Barry Merritt in Moretown.

“I rolled up to the sugarhouse and started working for him mid-February of 1999. A guy in an old Volvo with a jumpsuit and rubber boots started coming around. It was Johnny Summers and we got to be friends. Another neighbor, Russ Bennett, came around and so did Donny and Lise Wexler,” he said. 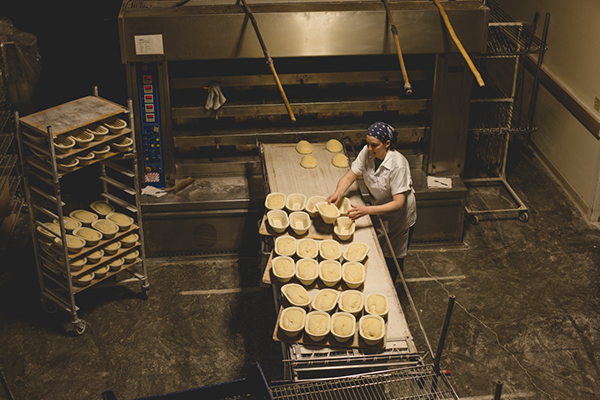 Summers roped him into helping with haying that spring, the Wexlers ended up buying Camp Meade and Russ Bennett built the bakery where the business is now located. Bennett and two other partners in Planetary Matters bought Camp Meade in 2018.

“Sometimes I wonder if any of this would have happened had I not met Barry,” George said.

“Another night, I was at the Summers’ house and Patty Martley dropped by and told me that Green Mountain Chocolates had moved out of the building on Route 100 in Duxbury. I went and talked to them and they said sure, they’d rent it to us,” he recalled.

The bread oven, meanwhile, had been stored in one of Dick Kingsbury’s trailers at Mad River Park, after it turned out to be 6 inches too long to be stored in Liza Cain’s parents’ garage.

“He was her old Little League coach and had a spare trailer. On January 29, I drove it there and they used forks on a bucket loader to get it in the trailer,” George said.

It took several months to get the Duxbury building ready to host the bakery, and by summer Kingsbury needed his trailer back. Red Hen Baking Co. opened on September 1, 1999, but due to an issue with a mixer, the bread had to be hand mixed for a few weeks. They opened with one employee plus George full time and Cain part time. They could put out 200 loaves of bread a day.

Flash forward 20 years. Red Hen Bakery is a thriving business with bread distribution throughout Vermont, selling upward of 2,000 loaves of fresh bread every day. The bakery’s cafe is a popular gathering spot, selling breakfast and lunch and other items plus coffee and bread. There are now 48 employees.

With the renaissance of Camp Meade and its regular Sunday Eat Up at the Green events, plus events like last December’s Winter S’morestice celebration and this weekend’s Great Vermont Bread Festival, Red Hen is positioned perfectly for the expansion of its cafe which is underway.

But more has changed since George and Cain started the business. They’ve shifted their production to using organic ingredients sourced within 150 miles and have developed relationships with the farmers who grow their grains.

“That progression has really been one of the neat things about having this business. I never thought all this would have happened,” George said.

He feels honored that the first annual Great Vermont Bread Festival coincides with his 20th anniversary and has already been baking some loaves in the newly constructed community bread oven that will highlight the bread festival.

“We’re 20 years old now and there are bakeries of this type, making handmade bread that were doing this well before we were. There’s a rich tradition here in Vermont, which makes things better for everybody. That groundwork was established when we got going. It’s not just bread, it’s beer, it’s cheese, it’s local food sourced and created locally,” he said.

He’s excited to socialize and work alongside the many Vermont bread bakers who will be at this weekend’s bread festival. Bakers, he said, are very friendly and collaborative in Vermont, but are also very busy, so they don’t usually take the time to get together. 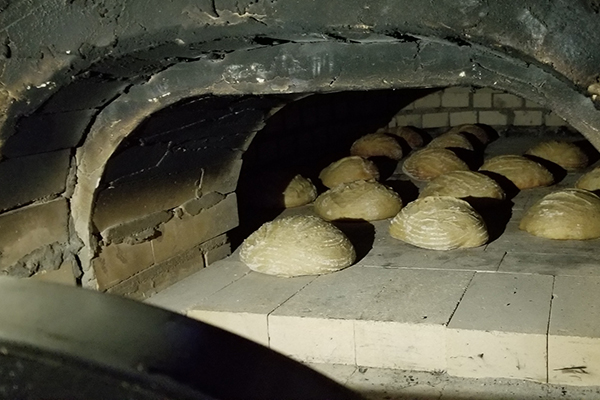 “I’m excited about this day with the Vermont baking community and I thought it would be really great to get all of the many bread bakers around the state together and have a celebration of what Vermont bread baking is,” he added.

Bakers from throughout the state will be baking bread in the community oven throughout the day (which starts with a French toast breakfast at 8 a.m.) and runs through evening. A variety of toppings will be available to eat with the various loaves. There will be kids activities, beer and other beverages, demonstrations, discussions and a pop-up bookstore.

Cain and George will be there, along with their daughters Maia, 15 (who works in the cafe as a barista), and Solveig, 13 (an accomplished baker of cakes and pies). The couple met in Portland, Oregon. Cain is from Waitsfield and George is from Maine. They live in Moretown.