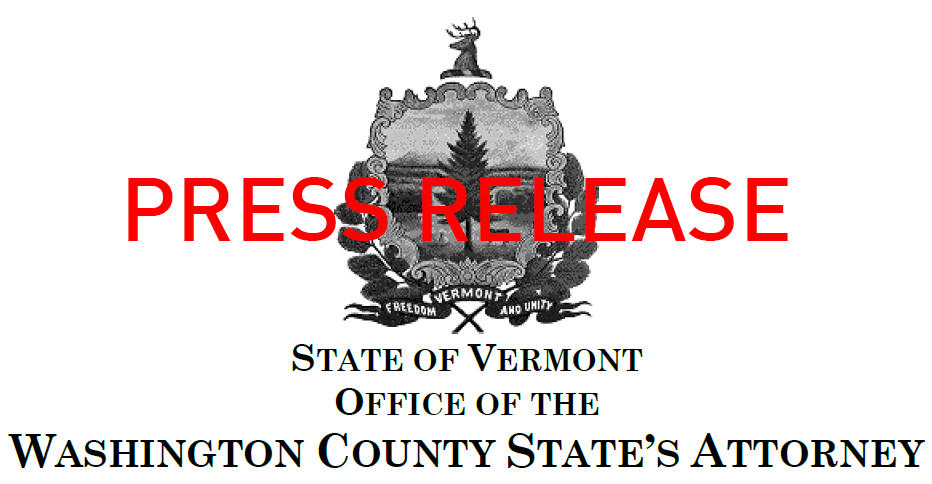 <<CLICK HERE FOR LINK TO PDF COPY OF PRESS RELEASE>>

BARRE, VT--Many community members, especially from the Mad River Valley, have expressed concern that an individual alleged to have committed a carjacking is eligible for release pending trial, especially in considering the traumatic impact on the victim. The Office of the Washington County State’s Attorney is cognizant of and sympathetic to these concerns. However, release, as recently occurred in the case of Wade Glenn is consistent with current law and the Legislature’s intent for the use of bail and conditions of release in similarly situated cases.

Following the incident, culminating with the alleged taking of a motor vehicle from the victim, Mr. Glenn was apprehended by law enforcement in Addison County. Later, following afterhours procedures, conditions of release were imposed by a Superior Court judge, and Mr. Glenn was cited by the Vermont State Police to appear at the Washington County Superior Court, Criminal Division on September 3, 2019 to answer for a misdemeanor offense of operating a motor vehicle without owner’s consent.

Upon review of the case by the State’s Attorney, and considering the statement of the victim, made on September 2, 2019, the felony offense of larceny from the person was added as a charge. Mr. Glenn appeared at his arraignment and was released on additional conditions of release following his arraignment on September 3, 2019. Mr. Glenn’s conditions of release include:

▪ A 24 hour curfew at his residence with exceptions for legal, medical, and work purposes;

▪ No contact with the victim, not to abuse or harass the victim, to remain 300’ away from the victim, victim’s residence, place of employment, and vehicle;

▪ Not to leave the State of Vermont without the court’s permission;

▪ Not to engage in any threatening or violent behavior

Courts assess both the risk of flight and public safety in determining whether to impose bail, impose conditions, some combination thereof, or to hold a defendant without bail altogether. Understanding this system is important to understand why most individuals are released on conditions, pending trial.

First, under Vermont law bail may only be imposed in order to mitigate the “risk of flight” from prosecution. This standard was recently modified by the legislature (Act 164 of 2018) to exclude use of bail to mitigate the “risk of non-appearance,” that is avoiding court proceedings without physically absconding from the jurisdiction. The current language of 13 V.S.A. § 7554(a) provides that:

Second, the court considers conditions of release with respect to appearance and public safety. In the context of public safety, pursuant to 13 V.S.A. § 7554(b)(2) a court must consider:

During the arraignment, Mr. Glenn, through counsel, reported ties to Vermont, including employment and housing in another county. The State noted Mr. Glenn’s past record in the Commonwealth of Pennsylvania and State of New Jersey, although the most recent conviction (a misdemeanor) in those jurisdictions was 13 years ago. Local media outlets have reported past crimes for which Mr. Glenn was accused, but not convicted. In setting conditions of release or bail, the State may only rely upon convictions. His Vermont record indicates one misdemeanor conviction in 2016 for a motor vehicle offense, and Mr. Glenn’s criminal record did not reflect any failures to appear in that or other past matters. This information was provided to the court and discussed in court.

“A person charged with an offense that is a felony, an element of which involves an act of violence against another person, may be held without bail when the evidence of guilt is great and the court finds, based upon clear and convincing evidence, that the person's release poses a substantial threat of physical violence to any person and that no condition or combination of conditions of release will reasonably prevent the physical violence.” (emphasis added).

Accordingly, the State has to demonstrate, by a heightened evidentiary standard, that pretrial detention is the only means to assure public safety. With respect to public safety, 13 V.S.A. § 7554(a)(2) provides that courts may impose conditions of release such as placing the defendant in the custody of a designated person or organization agreeing to supervise him or her, placing restrictions on the travel, association, or place of abode of the defendant during the period of release, requiring screening for alcohol or drug treatment, and other conditions reasonably necessary to protect the public.

Presently, often over the State’s objection or where the State has specifically requested that bail or a hold without bail order be imposed, individuals accused of felony offenses, including violent crimes, are released with no bail or on conditions that allow them to remain in the community pending trial. These situations frequently cause concern among victims of crime, especially given the limited responses available to violations of conditions of release.

In this case, while the alleged behavior of Mr. Glenn is deeply alarming, and was incredibly frightening to the victim, his release on an unsecured appearance bond and the imposition of conditions of release is consistent with the law of the State of Vermont. On the facts and evidence available at the time of arraignment the likelihood of bail being imposed or a hold without bail order being issued was minimal, given Mr. Glenn’s appearance on a citation and a lack of demonstrated history of non-compliance with court orders or failures to appear.

It is the mission of the Office of the Washington County State’s Attorney to utilize the full power of the criminal justice system in a manner that enhances quality of life and promotes public safety for the people of Washington County, consistent with our principles of effective prosecution, in a manner that is fair, transparent, and responsive to all members of our community.