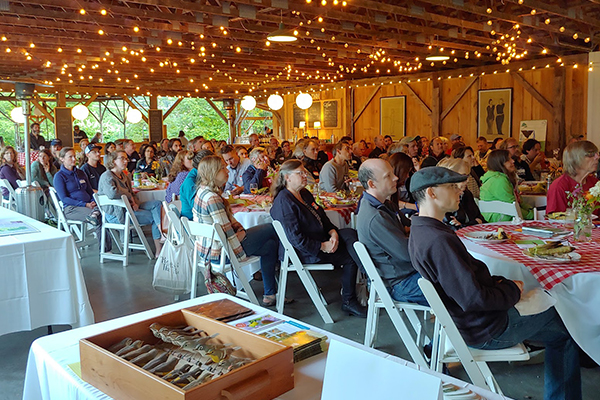 Last Thursday night, September 12, as the sun set over the fields of Lareau Farm in Waitsfield, over 100 community members came together to enjoy a meal and learn about an idea with global goals and local implications. The topic at hand was biodiversity in the Mad River Valley, and the members of the Vermont Alliance for Half-Earth are hoping to encourage their neighbors to preserve the habitat right outside their front doors.

The Vermont Alliance for Half-Earth is, in the words of Waitsfield resident and alliance cofounder Curt Lindberg, “a network of interested citizens” who, after attending last fall’s Half-Earth Day at the American Museum of Natural History, sought ways to bring the idea of Half-Earth home to Vermont. The idea of Half-Earth originated with biologist E.O. Wilson, and the Half-Earth Project is part of the E.O. Wilson Foundation. The goal, according to the project’s website, is to conserve half the Earth’s land and water in order to preserve biodiversity.

Biodiversity matters, according to event speaker Joe Roman, for a number of reasons, some practical and some spiritual. Roman, a professor and conservation biologist at UVM, noted that conserving biodiversity can provide economic benefit. According to a U.S. Fish and Wildlife Service document, $122 billion per year goes into the economy due to people simply going out to observe wildlife – a number comparable to money from spectator sports, amusement parks and casinos combined, Roman said. For example, Roman said in an interview, “People will spend money to travel to see birds or to buy equipment,” adding that “more than 600,000 jobs in the United States alone are related to birding.”

Roman said that the Vermont Trust for Public Land found that every dollar invested in public land conservation by the state of Vermont (including such projects as water quality measures and flood protection) returned $9 on the investment.

“Every dollar we put into preserving wild lands, we get something back,” Roman said, adding that while many folks actively use these areas recreationally, everyone benefits from, for example, flood protection offered by these preserved areas.

The true value of biodiversity, though, is “not because of the utility of biodiversity but because of the spiritual, the inherent value. I care whether there’s a future for whales on the planet, whether there’s a future for … insects,” Roman said. “Part of it is our own stewardship efforts. … I feel like we have a responsibility to all creatures on the planet and to help them persist into the future and to reduce extinction.”

UVM master’s student Eric Hagen echoed these sentiments. “I think biodiversity is more than just a theoretical concept – it’s people’s interaction with the natural world, and that value is kind of hard to put into numbers,” said Hagen, who is working with the Vermont Alliance for Half-Earth and gathering stories of biodiversity conservation efforts in the Mad River Valley. Hagen added, “I think the reason why people act is because they care, because they have a relationship, not necessarily just because of numbers.”

The Vermont Alliance for Half-Earth, which sponsored the September 12 event continues to seek ways to promote conservation at home. Of the 14 members of the Vermont Alliance for Half-Earth, six reside in the Mad River Valley. “We got talking about how to bring Half-Earth and its aspirations and objectives in a more concentrated effort to The Valley, with the longer-term goal of spurring greater support and greater action for biodiversity enhancement and habitat improvement,” Lindberg noted. To this end, the event included, in addition to Roman’s talk, a series of tables at which attendees learned about such topics as wildlife-friendly gardening (from the National Wildlife Federation) and dealing with invasive plants in forests (from the Vermont Land Trust).

Attendees noted that the event was a learning opportunity. “To learn more,” said Montpelier resident Jacqueline Huettenmoser, when asked why she had come. Robin Morris of Waitsfield echoed this motivation for attending.

What can residents do to preserve biodiversity, then, here in The Valley? “The most important outcome would be increased efforts by people in their yards, on their farms, in their forests, in their schools and their communities to improve habitat for the species who live in Vermont,” said Lindberg. “That can be as simple as putting in a pollinator garden, managing stormwater on your property better, conserving land and forests, logging in a way that is sensitive to biodiversity. There’s action that most people can take where they live, and our hope is that those local actions prove meaningful to people,” he added. Resources to guide these efforts are available from the websites of such organizations as Audubon Vermont, the National Wildlife Federation, Vermont Land Trust, and the Vermont chapter of The Nature Conservancy, Lindberg said.

On a larger scale, noted Roman, conserving biodiversity will require not only setting aside large areas of land and water, but also providing networks so wildlife can move among these areas. This means preventing further fragmentation of the landscape as well as restoration work in such areas as old, out-of-use farms.

The Vermont Alliance for Half-Earth has more plans in the works, including a series of “bioblitz” events happening this month in several area schools, where teachers and students will head out to document the biodiversity on their own campuses. This is part of a larger effort, dubbed “half-school,” to “integrate half-earth and biodiversity concepts into their curriculum and begin discussions about what they can do on their school campuses to provide better habitat,” Lindberg said.