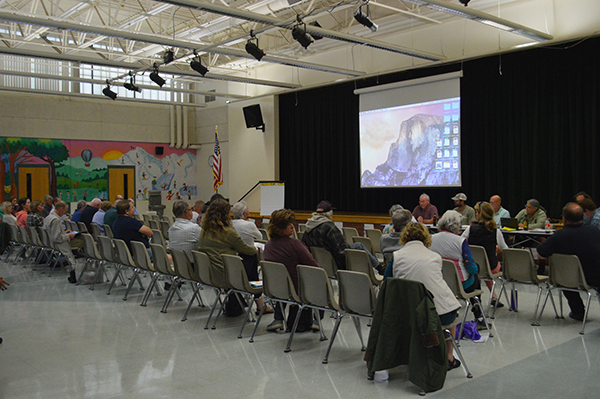 At a special Duxbury Select Board meeting town residents asked for clarity on budget spending and called for town officials to get their priorities straight.

Roughly 40 to 50 people showed up to the September 10 meeting at Crossett Brook Middle School. Residents heard reports on town projects that have been completed and those that need to be completed – with tax dollars.

Select board members went over the Waterbury Ambulance Service possibly relocating to Duxbury near the town office and highway garage. This site was the first pick out of three proposed locations because it could provide the infrastructure and space to support a new building. Some residents were in favor of the ambulance service moving to Duxbury to shorten response times; others were wary of giving up more town land as the town has a limited amount already. Others questioned how there wasn’t enough space in Waterbury and asked who would pay for the building. The discussion is still in its infancy.

Select board members went over the gravel pit closure and the work the town did to complete it. Residents were not impressed with the price tag that came before them for the site work for a new salt/sand and equipment storage shed in the current pit. The town has a grant to build a new shed but does not have funds on hand for the site work which is estimated to cost $195,735, the lowest of the four bids the town received. The town accepted the low bid from Dirt Tech on August 16, prior to the special meeting.

The RFP for the site work called for “re-grading the area generally as shown on the plans, including the grading of a berm as shown with evergreen trees, install fabric and dense graded gravel 18 inches thick meeting the specifications on the plan. A toe drain is to be installed on the low side of area to be graveled, discharging stormwater to a settlement/depression area for any runoff to be pretreated. A storm pipe is to be installed and a gravel wetland to be constructed with an outlet structure and rehabilitation of the discharging swale with stone check dams.”

Select board members also went over town staffing, whether or not to hire a fourth full-time road crew member or to contract out work for ditching and culverts. The other position changes include the need for a new town treasurer. David Specht, the current town treasurer, is not seeking reelection. The part-time select board assistant, Jonathan DeLaBruere, has been working more than his 20 hours a week to help the town with grant writing and various projects. The select board asked what the residents thought of hiring him full time. DeLaBruere has written 14 grants for the town and received nine of them. DeLaBruere said the total cost for most of the road projects is $3,304,066. Duxbury’s portion to match is $566,216, which the town would need to pay out of pocket or pass a bond to cover.

Residents wanted the town to do necessary fixes that needed to be done before adding personnel and starting more projects.

Town residents were also surprised to hear that the town is already running a deficit two months into the new budget season. Last budget season ended with a $108,000 deficit. Town residents want select board members to recognize priorities and do emergency fixes before tackling bigger projects and spending more money.