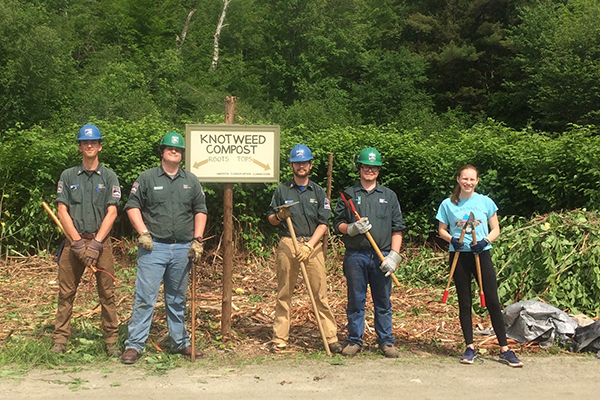 Jito Coleman, Warren Conservation Commission chair, updated the Warren Select Board members on the commission’s efforts to control Japanese knotweed in the town.

Coleman attended the October 8 select board meeting where he cited locations where his team found knotweed. The conservation commission and contractors have been working to remove the invasive species and have been mapping out areas where it’s been found across the town. Town residents at Town Meeting 2019 approved an article to set aside $13,750 for knotweed exploration.

The committee put stakes in sites that are impacted and discussed with select board members putting the mapped locations on the town website. There are some 150 sites where the invasive species has been found. The stakes will also be a reference point when the team looks for more affected sites later on. Coleman said that some areas with knotweed can be pinpointed to gravel-based projects in the past. Coleman and the board discussed bringing more awareness and having conversations with highway crews all over The Valley about how contaminated gravel can spread knotweed.

Coleman told the select board that after the crew manually cuts the knotweed, they work to remove the roots. He said he’s found roots that were as big around as his forearm. He also reported that it takes the same amount of time to kill the plant as it takes to grow it, adding that if it’s been in an area one year, it takes one year to kill it. If it was growing for 10 years, it might take 10 years to extinguish it.

In terms of specific locations where knotweed was found, Coleman and his team explored the Roxbury Gap and found 26 contaminated sites before the first major turn on the road. Exploring Dump Road they found no traces, and found none on Airport Road until near the bottom by Route 100. The team did not get to explore Route 100 completely but found there was a large amount near Granville on the Mad River where Plunkton Road comes out onto Route 100, possibly from Tropical Storm Irene or more recent state projects.

Coleman explained that knotweed travels by people or by water source and it can be trucked around during highway work. Coleman’s team found 14 clumps in the Warren sandpit that crew members knew about. Coleman found that the Simpson gravel pile is completely contaminated by knotweed on the top, but the bottom of the pile is clean of the species.

Coleman told the board that he hopes to hire a summer intern or graduate student who enjoys invasive species research, possibly from the University of Vermont. Coleman said that the committee needs a bigger plan and strategy to tackle the problem, and that very little is being done at the state level for knotweed control.

Board members and Coleman joked about the potential help and management of the knotweed from animal grazing. Coleman said that some towns and areas have goats come in to eat the plants. While the animals graze, landowners can put grass seed down for the animals or goats to stomp into the ground and grow. Some of the areas impacted in Warren might make it hard for animal grazing, such as along roadsides. The board asked if Coleman could make a presentation on knotweed control efforts at Town Meeting next March.