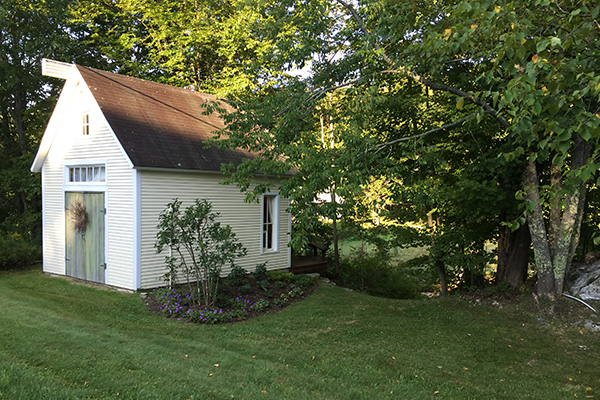 As The Valley gears up for this weekend’s Tiny House Fest Vermont at Sugarbush, The Valley Reporter checked out a couple of local tiny houses as well as the zoning that supports them.

Charlie Snow, Warren, lives in a 408-square-foot tiny house that originated as a FEMA trailer in the South. He purchased it for $20,000. It has two bedrooms, a full-size bathroom and an open kitchen-living-dining area. The kitchen has full-size appliances.

After purchasing the first unit, Snow bought a second one, which had been damaged. He paid $3,500 for that one and has it on property he owns in Alpine Village where he has gutted it and is putting it back together.

His unit came with a heat pump that was supposed to heat and cool – and it did to a degree. In the summer his electric bill (which covered air conditioning, hot water and everything else) was $125 a month. The first month he used the heat pump for heat he got an electric bill for $1,306 after he used 5,000 kilowatt hours. He bought a different more efficient heat pump and now his winter power bill is $225.

He is outfitting the unit he is rebuilding with a similar new heat pump. He has improved the insulation and wiring and added eaves to this unit. He also plans to construct more built-in cabinets and upgrade the doors on this unit.

Both his unit and the one he is renovating are 12 by 34 feet and require a Triple X trailer with a hitch to be moved. It costs $1,800 to move the trailers. Snow is in the process of constructing a home for himself on the land he owns in Alpine Village and hopes to move both of his FEMA houses to another parcel of land when he completes his own home.

He plans to put both of the FEMA homes on that parcel, with full basements, and offer them as rental units.

Down the street from Snow Road, where Snow’s home is, is a tiny home along the Mad River at Jack and Jean Sharry’s home on Main Street. Their tiny home is permitted as an accessory dwelling and it is used only for housing overflow guests. It does not have water and wastewater.

It was built in 1994 as a Yestermorrow project. (Yestermorrow is one of the hosts of this weekend’s Tiny House Fest Vermont.) It features a tiny woodstove, two twin beds, a seating area and a deck on the Mad River. It has a loft where a double bed is accessed via a ladder. Jack Sharry said the first floor is about 300 square feet.