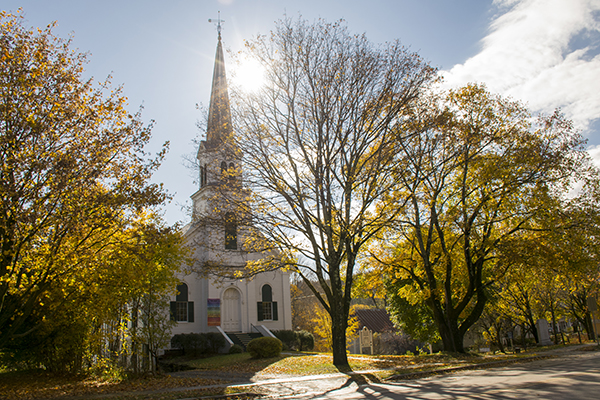 After the Waitsfield Select Board voted to send documents related to a proposed tri-town local option tax (LOT) to its attorney for review, board members were asked to consider whether they wanted to reconsider that decision either at a special meeting or a regular meeting.

On October 21, the select board voted to send the memorandum of understanding (MOU) and bylaws that were created by a tri-town negotiating committee for a local option tax to the town attorney. The tri-town LOT would raise about $700,000 which would be invested in housing, transportation, community projects, recreation and marketing in The Valley.

Two select board members from each town served on that committee and drafted the documents. The Fayston Select Board and the Warren Select Board previously had their attorneys review the documents. Waitsfield initially deferred that process after the town realized that it could not bring a ballot item asking voters to adopt an LOT without amending the town’s charter. State statute allows voters in towns that were considered gold towns at a specific date to adopt an LOT. Warren and Fayston met that criteria. Waitsfield didn’t.

The town has adopted a timeline for reviewing a charter change and plans to bring that as a ballot item to voters at Town Meeting in March 2020.

Select board member Darryl Forrest asked his fellow board members to move on sending the tri-town LOT documents to the town attorney, rather than wait until the town’s review of the charter change process has been completed.

He said that the document review by Warren’s and Fayston’s town attorneys had yielded important feedback and said getting that feedback from Waitsfield’s attorney was important to keep the tri-town LOT process moving.

Town administrator Trevor Lashua said that sending the documents now would be a reversal of policy that presents a back door way to review one proposal (tri-town LOT) before the town has voted on a charter change that could enable either a tri-town LOT or a Waitsfield-only LOT.

There is support from Waitsfield Select Board chair Paul Hartshorn and board member Sal Spinosa for exploring a Waitsfield-only LOT rather than the tri-town approach favored by Forrest and board members Kellee Mazer and Jon Jamieson.

“We originally agreed that we’d fully negotiate an MOU and we haven’t fulfilled our commitment by getting an attorney to review it,” Mazer said.

Forrest made a motion to send the documents to the town attorney, which Jamieson and Mazer supported, and Hartshorn and Spinosa opposed.

During discussion and after discussion of the motion there were heated words about what signal it would send to voters and whether the review meant the town was signaling its support for the tri-town proposal.

Mazer said she felt the board was doing a disservice to voters by not letting them understand the MOU and tri-town LOT proposal by continuing the review process. Jamieson said he had originally supported a two-step process of charter change, the legal review, but said he saw the need to keep the ball rolling and said he felt voters were smart enough to understand the tri-town LOT process, the Waitsfield charter change process and the notion of a Waitsfield-only LOT.

Hartshorn, Lashua, Jamieson and Forrest corrected him and said that only the charter change would be on the ballot next year.

On Monday, October 28, select board members were asked via email if they could attend an October 30 special select board meeting to ratify or overturn the October 21 vote to send the documents to the attorney.

“The adopted select board rules and regulations allow for a special meeting to be called by the chair. A special meeting to either ratify the earlier action or overturn it provides the requisite clarity to address concerns about process and procedure without holding up the attorney’s review (if the action is ratified) or accruing legal expenses (if the action is not ratified),” wrote Lashua in an email to the board, noting that the agenda would be limited to the specific topic of the October 21 vote.

Asked whether board chair Hartshorn had requested the special meeting, Lashua said, “We were polling folks to see if they were available to potentially ratify or overturn that decision.”

Mazer, Forrest and Jamieson were unable to make the meeting and so there was no quorum.

Lashua said he’d heard from individual board members about their concerns about the October 21 vote.

The Valley Reporter reached out to Hartshorn with three phone calls seeking to know whether he made the request for a special meeting. He returned one call to The Valley Reporter’s business office at 7:40 a.m. October 30, and left no message.

Board members subsequently received an email asking them if a November 18 meeting with town attorney Joe McLean to discuss the MOU and bylaws would work. The October 21 motion called for sending the documents electronically to McLean, rather than have him drive from Burlington to Waitsfield for a meeting with the board.