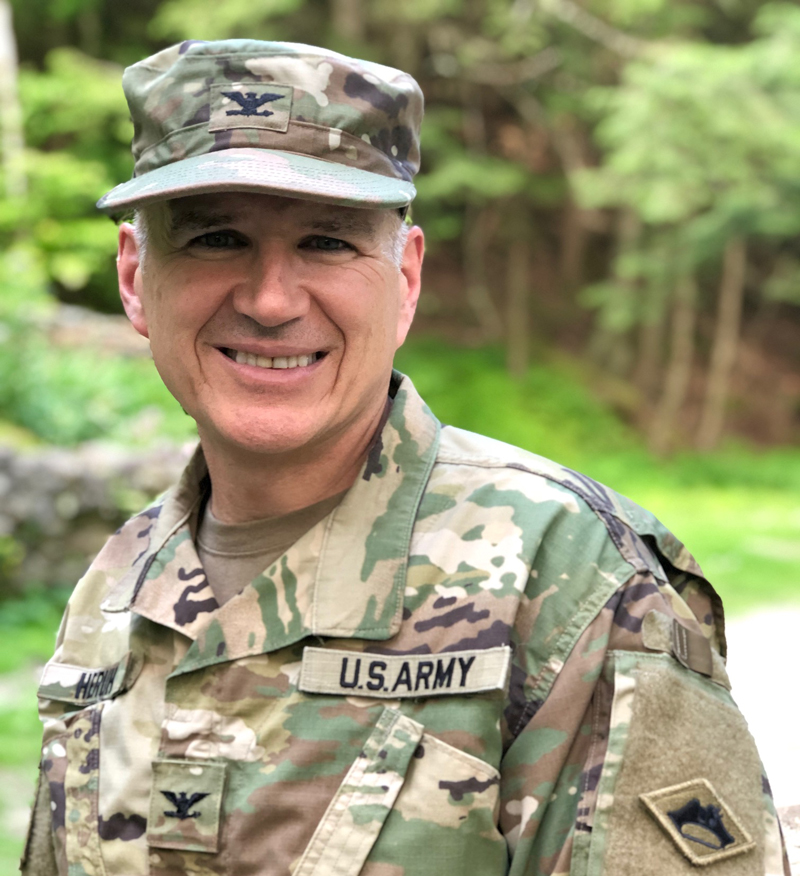 After completing Vermont Law School in 1988, David Herlihy, Fayston, joined the Navy as a judge advocate general officer (JAG). He served in Newport, Rhode Island, and then Virginia and over three years in Italy.

While he was there, he worked throughout Europe and the Middle East. After 13 years he returned to DC where he worked before moving back to Vermont in 1995. Once back in Vermont, he worked a civilian job at the Vermont attorney general’s office and joined the Vermont National Guard.

Throughout his years of active and National Guard service, he provided legal counsel, at times prosecuting and at times defending service people as well as interacting with foreign authorities regarding issues that came up.

“While I was in Tikrit, the whole time was spent working with Iraqi courts on Rule of Law mission. I was working with courts to help them develop their practices to be more faithful to the Rule of Law,” he said.

In Afghanistan he was the senior attorney for a task force of 15,000 people operating four provinces. There he worked on military justice for service members and on contracting for all of the military’s contracted services there.

“I also did a lot of Rule of Law development with the courts and various aspects of civil society to try and foster engagement by the population. It was interesting work because we were trying to get the government to incorporate more democratic ideals, but also needed to develop people so they had an expectation of their government. The work was to get the population involved and do grassroots work getting local municipal government officials more engaged and involved,” he said.

In addition to working in the Vermont attorney general’s office, Herlihy has held a variety of other positions in state government including general council and was appointed the commissioner of the Vermont Department of Human Resources. He is now the executive director of the state Board of Medical Practice where he oversees the practice of medicine by physicians, physicians’ assistants and podiatrists. It’s a board made up of six members of the public, nine doctors, a physician’s assistant and a podiatrist.

When interviewed on Sunday, November 3, Herlihy had just returned home after spending the weekend working for the Guard where he does “a little bit of everything.”

Herlihy is a native of New Hampshire whose family moved to Connecticut. He began spending time in Vermont during school. He attended the University of Connecticut before attending Vermont Law School. While in school he had the opportunity to spend time in Europe.

Asked why he joined the Navy straight out of law school, he said, “My family has a history of military service.” His father served in World War II and he has a brother in the military.

“One draw of the Navy was the opportunity to practice law and see the world,” he said.

Herlihy is married to Annmarie Furey and they have two children. Their son, Parker, recently moved out West to follow his love of skiing and their daughter, Jascha, is attending UVM.